Les Hanois Lighthouse—built by Trinity House in 1862—marks the shoals and reefs off the coast of Guernsey.

Situated at the western end of the Channel Islands, the white granite lighthouse rises from a reef on the southwest side of the Island of Guernsey. Les Hanois Lighthouse is important in the development of lighthouse engineering because it was the first to be built with all the stones dovetailed together both laterally and vertically, thereby making the construction one solid mass. The cement mortar in the joints formed between stone faces lock the dovetails so that the stones cannot be separated without being broken. This method became the pattern adopted for subsequent lighthouses built on sea rocks.

Previously, various methods of connecting the stones in rock towers had been used at other lighthouses. John Smeaton developed the use of granite blocks for rock towers, connected together with metal pins and marble dowels. Alan Stevenson used a similar method in the construction of the Skerryvore Lighthouse, while his father, Robert Stevenson, arranged stones of each layer in the Bell Rock, forming a series of dovetails which were then pinned together. It was  William Douglass, the 28-year-old son of engineer Nicholas Douglass, who suggested the unique dovetailing method.

A helideck was constructed above the lantern in 1979. Automation began at the Les Hanois Lighthouse in July 1995 and the station was demanned in January 1996. The station was converted to solar power with panels mounted around the lower part of the helideck support. The lighthouse is now monitored and controlled from Trinity House’s Planning Centre in Harwich, Essex, UK.

When I read about the way the Les Hanois Lighthouse was constructed in such a way that the individual stones united in one solid mass, I couldn’t help but relate the principle to people, and how much stronger we are when we’re united.

Many references to the importance of being together and working together can be found in the Bible, especially in the New Testament. After a year of Covid isolation, I believe most people are appreciating the opportunity to get together with others more than ever. And what is the ‘mortar’ that binds us together? Love. Love for our fellow man gives us unity as well as peace and make us stronger together.

And over all these virtues put on love, which binds them all together in perfect unity. Colossians 3:12 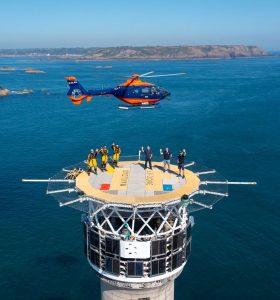