Prayer for a Russian Lighthouse

Prayer for a Russian Lighthouse 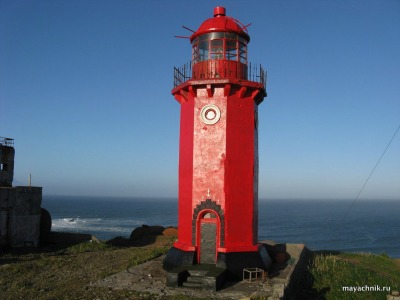 Elena Barbasheva strolled along the beach, mulling over her family’s situation. How had things turned upside down? Despite her law degree, hard times had fallen on her household and she had been looking for other work for three months.

She gazed out at the water, hoping the gentle waves could help her relax. Wouldn’t it be nice to go away and live on a desert island, away from the pressure and problems at home, some place where there’d be peace and quiet? Then an idea came to her. Why not work at a lighthouse?

Although she knew nothing about lighthouse keeping, the sea had always been part of her life. Her father was a ship captain, and she’d been on board many of his ships. Her husband Vladmir had worked as a mechanic for the Russian Navy, as well as, crewed in Greek ships.

The next time Elena and her husband went to the employment center, she saw a notice that the military was recruiting people to work at lighthouses. What a coincidence, Elena thought. It was as if Someone had read her mind and knew what she’d wished for. Within a week, she and her husband were hired and sent to Kurbatova Lighthouse where she’d be the Head Keeper and her husband would be the mechanic (or assistant).

When Elena stood on the gallery of the crimson lighthouse for the first time, she knew her prayers had been answered, and she had found her “desert” island.

Kurbatova Lighthouse is at the northeastern tip of Shumshu Island in the Kuril Islands between the Sea of Okhotsk and the Pacific Ocean. Elena and her husband plus another person who works for them are the only inhabitants of the seventeen-mile island. 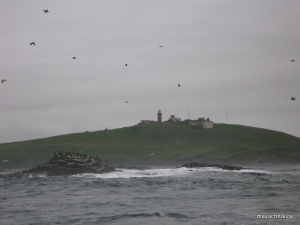 Since 2006, Elena and Vladmir have worked hard to maintain the lighthouse, making sure the light has power, equipment is repaired and the structure maintained. Despite rain, sleet, snow and winds up to fifty miles per hour or higher, they make sure the beacon’s red light still shines. Communication with the outside world is only possible with satellite telephone. Cell phones and Internet service is not available to them.

During the summer months, visitors drop by via boat or kayak. But from November to June, they are cut off from the rest of the world and the storm season begins. All their yearly supplies are delivered in the summer, so if they don’t plan properly, they could run out. The must also be prepared for their own medical care because a helicopter might not be able to arrive quickly. The long Russian winter evenings provide extra time to pursuing hobbies like making handicrafts or reading.

Once a year, they are able to take a vacation, but only one at a time. During their time off, they see their grown children and families, get a physical and enjoy some relaxation before they return to the lighthouse. Despite all the difficulties they encounter, she and Vladmir are very happy

Elena is often asked why she would want to live in such a remote place. Don’t they get bored or lonely? She answers them by saying that the work of a lighthouse keeper is a state of mind which is a chosen lifestyle. They are convinced that they are exactly where they’re supposed to be. It is their true calling and their destiny…and an answer to a silent prayer. 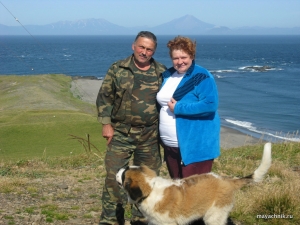 “Praise be to God, who has not rejected my prayer or withheld his love from me!” Psalm 66:20

Story by permission from Vasily Korablev at www.mayachnik.ru “Light keeper. Lighthouses of Russia and the world»