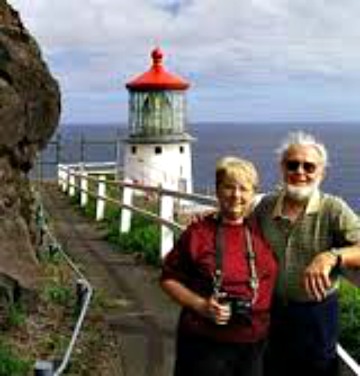 If you like lighthouses, you enjoy looking at them. If you have the opportunity, you visit them in person. However, very few people ever get to visit all of them. But thanks to lighthouse photographers, we can still look at pictures of lighthouses in places we’ll never go.

This blog post is about two people who are responsible for many of those pictures. They are “The Lighthouse People.”

In 1987, Bob and Sandra Shanklin began their quest to photograph every lighthouse in the United States. In February, 1999, they reached their goal with a trip to Hawaii. In 2001, they added to their list by photographing the lighthouses of Puerto Rico.

Their mission was exciting, challenging and sometimes dangerous. Operating with a shoestring budget and sometimes sleeping in their car, the Shanklins roamed from the east coast to the west, from the most northern lighthouse in Alaska to the tip of the Florida Keys.

In their own words, 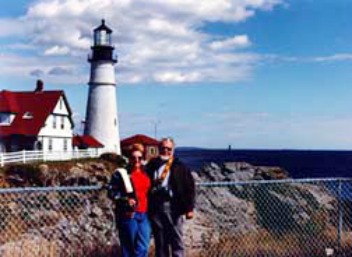 We’ve trudged down many a trail, high winds blowing, slogged through sand carrying camera bags in hundred-degree temperatures, with bugs biting, Nikons slung around our necks. We’ve waded knee deep on a trail flooded with water from the Hudson River. We’ve gone out on the water in sport boats, crabber’s boats, lobsterman’s boats, rowboats and inflatables. We don’t know how many ferries we have taken.

We’ve flown in twin engine planes, single engine planes, seaplanes and helicopters. We’ve climbed over boulders, hung from tree branches over a cliff and rolled in a mud puddle under a fence.

Why? To photograph a lighthouse.

They’ve visited lighthouses that are no longer standing, and they’ve photographed lighthouses that have been relocated. Their determination brought them to lighthouses they were told were impossible for them to reach. Off the coast of California, they climbed a rocky, guano-covered cliff trying to avoid the nests and overprotective attacks of terns to reach a deteriorating lighthouse at the top.

They flew out several times to photograph a lone lighthouse in the Great Lakes that had been enshrouded with fog for days, making it impossible to photograph. But on their last try, God opened the clouds and let the sun shine down on the lighthouse, giving them a perfect shot. 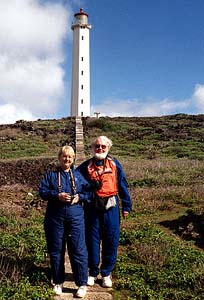 Bob and Sandra are no longer photographing lighthouses, but thanks to them, we can see the lighthouses ourselves and we can have our own copies of their pictures. Check out their photos at www.thelighthousepeople.com.

Thanks, Bob and Sandra, for photographing the lights for us!

“Commit to the Lord whatever you do, and he will establish your plans.” Proverbs 16:3