Prisoner at the Lighthouse

Home » Prisoner at the Lighthouse
Previous Next

Prisoner at the Lighthouse

For sailors navigating the shallow straits around the southern tip of Florida, the lighthouse on Garden Key in the Dry Tortugas was a welcome sight.

But to the inmates of the prison at Fort Jefferson which surrounded the lighthouse, it was a constant reminder of where they were, trapped on an island in the humid tropics.

The fort encompassed the whole island including civilians and soldiers with their families, as well as the lighthouse keeper and his family. It wasn’t until the Civil War that the fort became a prison, reaching a peak of 900 prisoners in 1864. 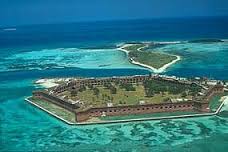 The four most famous of its prisoners arrived after the war in 1865. These were the four remaining men convicted of involvement in the conspiracy to assassinate President Abraham Lincoln. Four other conspirators had already been executed, but these four were less involved according to their testimonies, but guilty by association with the assassin John Wilkes Booth.

Everyone who lived on the island suffered from similar problems – heat, humidity, insects, tropical storms and scarcity of good food. The original name for the islands, “Las Tortugas,” referred to the plentiful population of sea turtles. However, later the word “Dry” was added to communicate the lack of fresh water available. As such, all the inhabitants experienced the shortage.

Dr. Samuel Mudd was one of the inmates convicted in the Lincoln conspiracy because he aided John Wilkes Booth by attending the assassin’s broken leg sustained the night of the murder. Although he had met Booth before the assassination, he claimed no involvement in planning the event. Regardless of his claimed innocence, however, he found himself in the tropical prison, confined to a life of deprivation, labor, illness and captivity. 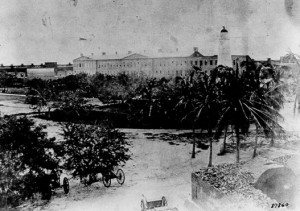 Two months after arriving at the prison, Dr. Mudd heard that the authority of the prison was being transferred from the 161st New York to the 82nd US Colored Infantry. As a former slave-owner, Dr. Mudd feared his treatment under the new command and attempted escape by hiding aboard a supply ship. He was discovered, however, returned to his dismal quarters, and placed in shackles.

Dr. Mudd wrote to his wife back home in Maryland that his legs and ankles were sore, swollen and bruised from the leg irons. It wasn’t until six months later and an appeal from his wife to President Andrew Johnson that the shackles were removed.

One must imagine how Dr. Mudd felt as he gazed up at the lighthouse and considered his plight. Whereas once he was free, now he was restricted, controlled by others in authority, separated from his family, his future bleak. Did he think about the slaves he once owned and understand how they must have felt with their freedom removed? 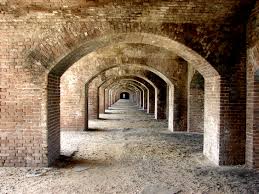 When he first arrived at the prison, he had assisted in the fort’s hospital, but after the escape, he was assigned to hard labor. However in 1867, a yellow fever epidemic broke out in the prison and shortly afterwards the prison doctor died of the disease. Dr. Mudd struggled with the desire to help and the fear of being unjustly accused once again should someone die under his care. In a letter to his wife, he said,

I felt that I had to make a decision, and although the rule of conduct upon which I had determined was not in accord with my natural feelings, yet I had the sanction of my professional and religious teachings and the consciousness of conforming to that holy precept, “Do ye good for evil,” which alone distinguishes the man from the brute.

Dr. Mudd, a devout Catholic, volunteered his services to help his fellow man, and as a result, very few of the infected died from the disease, yet one of his fellow accused conspirators was a victim. Dr. Mudd himself also contracted the disease, but fortunately survived. His efforts to help others prompted petitions from the soldiers to the president appealing his immediate release, but it took another year before the request was granted.

Many of us know what it’s like to feel imprisoned, if not by actual walls. Our past, our thoughts, our attitudes or our habits can trap us and take away our freedom. Sometimes it’s only when we lose our freedom that we appreciate it. But Christ doesn’t want us to be burdened that way.

“It is for freedom that Christ has set us free. Stand firm, then, and do not let yourselves be burdened again by a yoke of slavery.” Galatians 5:1