Refuge in the Lighthouse

Refuge in the Lighthouse 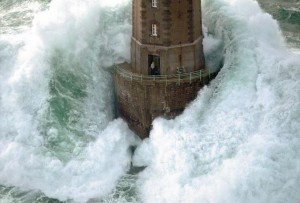 It’s perhaps the most famous lighthouse picture. Taken by French photographer Jean Guichard in 1989, it has been featured on posters and calendars throughout the world.

The dramatic image of La Jument lighthouse being engulfed by a monster wave is amazing and awe-inspiring. One can almost feel the tremendous power of the water as it surrounds the tower. Then a closer look reveals a man standing in the doorway. My first reaction was to gasp and think this can’t be an actual picture. Surely this is an example of trick photography, since a real person couldn’t possibly survive such a situation.

However, the photograph is real and so is the man. For days, waves had pounded the structure during a fierce storm. Guichard had gone out in a helicopter to photograph the lighthouse amidst the tempest. What he didn’t know at the time was that the two lighthouse keepers had been waiting to be rescued as waves shook the building and smashed windows.

When he heard the sound of Guichard’s helicopter, Keeper Theodore Malgorne went outside to see if it was the rescue helicopter. When he realized it wasn’t, he hurried back inside just as the wave was breaking over the lighthouse, avoiding certain death. The tower stood and the keepers survived safe inside.

As we face a new year, we have no idea what storms lie ahead – emotional, financial, physical or others. What we do know is that God will be there to protect and carry us through them. He is our strong tower and in Him is our refuge.

“For you have been my refuge, a strong tower against the foe.” Psalm 61:3 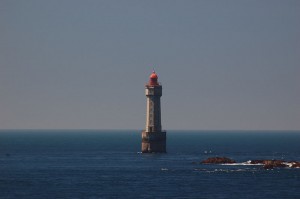