Home » Rescued by a Buoy*
Previous Next 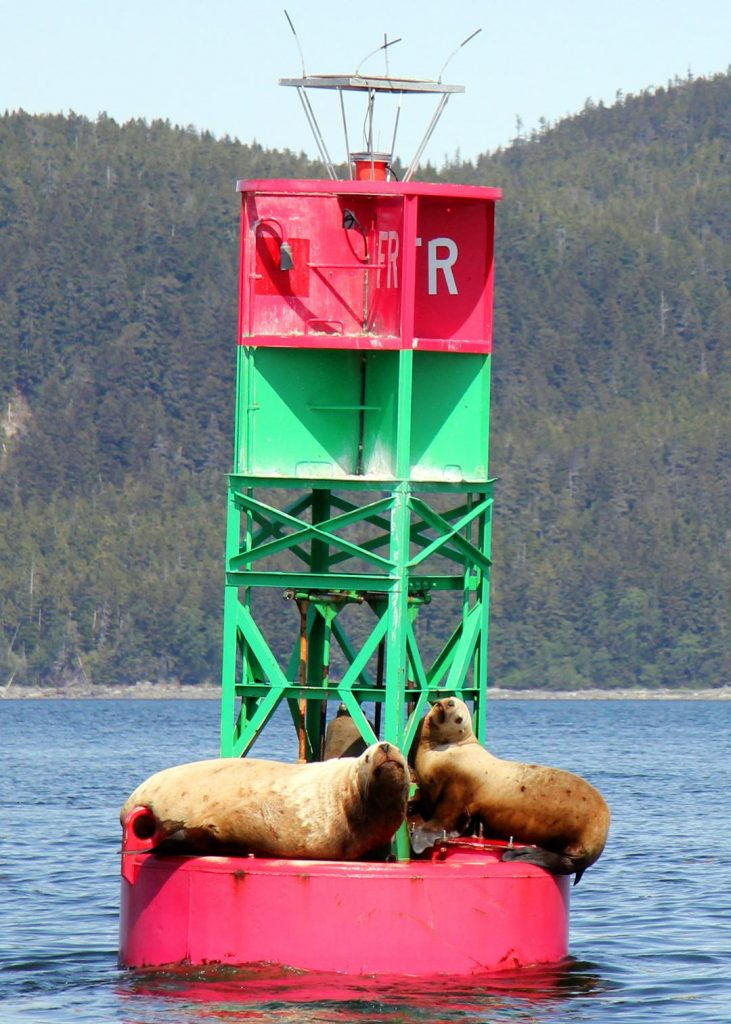 I’d like to welcome a fellow lighthouse lady, Elinor DeWire, who wrote this week’s post. Elinor is a lighthouse expert and enthusiast, and so we have the latter in common. Hope you enjoy her post! Leave a comment and let us know.

To the landsman, buoys are homely, rotund objects bobbing awkwardly in channels and harbors, making a monotonous racket with their ceaseless clanks, gongs, and whistles. Their colors and shapes give them the appearance of castaway circus clowns, but these important navigational aids perform a critical service at sea as the road signs of the waterways. 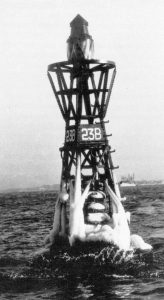 No one would argue that buoys save lives, but sometimes they serve us in unexpected ways. A lighthouse family at Timbalier Bay, Louisiana was saved by an iron can buoy not far from their sea-swept home in 1867. The terrible March 29 hurricane of that year washed away the tall, brick lighthouse, then scoured clean the low sandy island on which it stood and left it submerged under a high storm tide. The castaway lightkeeper, his wife, and daughter “faithfully performed their duties, barely escaping with their lives. Awash in the storm surge, they clung to each other as the tide fortuitously carried them to the trusted buoy. They crawled inside and rode out the storm, remaining on board for several days until rescued by a passing ship.

More compelling is the 27-hour ordeal of fisherman, Robert Curtis, who owes his life to the Bay Ledge Buoy, located six miles south of Carver’s Harbor, Maine. Curtis had gone clamming on a clear, cold Sunday morning in January 1984, motoring out of Rockland in his 15-foot boat, headed for the rich clam beds at Kent Cove. Though the weather forecast called for a sunny and mild day, the sky soon took on a drab gray pallor. Before long, Curtis was caught in an unexpected snow squall.

The wind picked up to 35 knots, and waves began swamping the little boat. Curtis bailed furiously and tried to steer for the nearest land. He motored aimlessly for more than an hour, his boat sloshing and bouncing like a toy in a bathtub. By noon the temperature had dropped into the single digits, and Curtis was twelve miles off course. His hands were numb, and ice encrusted his face and hair, but help was in sight. Ahead of him bobbed the Bay Ledge Buoy with a big number 2 painted on its top.

Though Coast Guard regulations prohibit climbing on a buoy or using it as a mooring, Curtis knew he had to tie up to the buoy or risk being blown out to sea. Carefully, he eased alongside, but just as his hand grasped the buoy, the boat was swept from under him. He scrambled onto the bobbing can, wet and chilled, and watched his boat slowly putter away.

Waves drenched him, and his hands began to freeze to the metal. Wisely, he removed his belt and attached it to the buoy so that he would have a strap to hold. His down jacket became a sit-upon that kept him from freezing fast to the ice-shrouded buoy. Curtis knew it was important to move about, so he began walking round and round on the buoy holding tightly to the belt.

When night came and near unbearable cold set in, he tore off bits of his rubber boots and burned them with a Bic lighter to warm his hands and face. There was little heat generated, but the simple act gave him hope and “buoyed” him throught the long, frigid night.

A helicopter passed over in the darkness, sweeping a spotlight, but though Curtis screamed and waved, he was not sighted. A friend had reported him missing, and crews from Coast Guard stations in Rockland, Portland, and Cape Cod were combing the waters by aircraft and rescue cutter. Local boaters turned out to look for Curtis, and even a 110-foot tug out of Portland joined the search. 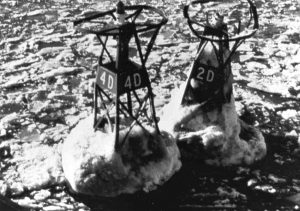 At dawn Curtis desperately searched the horizon for signs of rescue, but saw none. He was convinced death awaited him on the lonely buoy. Around 2 PM, he heard engines approaching and spotted the Point Hannon out of Jonesport. The crew were amazed to find Curtis alive and cheering energetically as they pulled him off the frozen buoy. He was taken to a Bangor hospital suffering from minor frostbite of his hands. Fortunately for Curtis, his rescuer had done what all good “Buoy Scouts” do when lost: It remained stationary, waiting to be found. 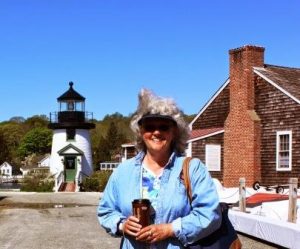 Elinor DeWire is an author, speaker, historian, and educator based in Connecticut. She has written more than twenty books on various topics, including lighthouses, weather, and amateur astronomy. She also writes novels under her pen name, J.J. Scott. She has received numerous literary and public service awards for her work. She serves on the Board of Directors for the U.S. Lighthouse Society. Visit her website at www.ElinorDeWire.com.
“Turn your ear to me, come quickly to my rescue; be my rock of refuge, a strong fortress to save me.” Psalm 31:2
By Marilyn|2019-10-18T20:46:29-05:00October 18th, 2019|Lighthouse Blog Category|2 Comments