Rethinking Priorities at an Alaskan Lighthouse

Rethinking Priorities at an Alaskan Lighthouse 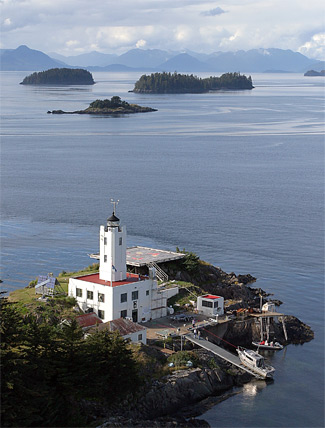 The waters of Alaska are a beautiful place to take a cruise surrounded by snow-capped mountains and pristine forests. But for lighthouse keepers at the Five Fingers Island Lighthouse, loneliness outweighed the beauty of its isolated location.

Five Finger Islands, a collection of rocky islets in the northern extreme of Frederick Sound, lie about forty miles from Petersburg, the closest community of any size. These five islands, several of which are only visible at low tide, resemble a set of bony fingers emerging from the icy waters to snare unsuspecting mariners. Situated along the Inside Passage, the danger these islands presented demanded the need for a lighthouse.

Five Finger Lighthouse was activated on March 1, 1902, and is credited with being Alaska’s first lighthouse. Although the lighthouse was initially staffed by three keepers, one head keeper and two assistants, turnover was high. Most keepers spent only one or two seasons on the island before leaving, the isolation being too great.

When the U.S. Coast Guard took control of all lighthouses in 1939, a four-man crew was stationed at the lighthouse. In April 1982, crewmember Dan Peckham, who left a pregnant wife and daughter for the one-year assignment, said, “The hard part is being away from the family.”

The crew’s lifeline to the outside world was the Coast Guard helicopter that brought the weekly delivery of food, mail and movies. In the winter of 1982, the weather conditions were so poor the helicopter was delayed from making the scheduled trip for a couple of weeks. During this time, the water around the lighthouse reached thirty-foot swells while the wind howled at eighty-five miles per hour. Ice encased the lighthouse, trapping the crew inside for several days. When the helicopter finally arrived, Peckham exclaimed, “We were just tickled to death to see faces out there!”

According to crew member Brian Dunlap, “Life at the island gives you some time to think. You do a lot of that out here.” All that thinking and isolation shifted the men’s priorities, as it was agreed they enjoyed getting mail more than they did their paychecks. 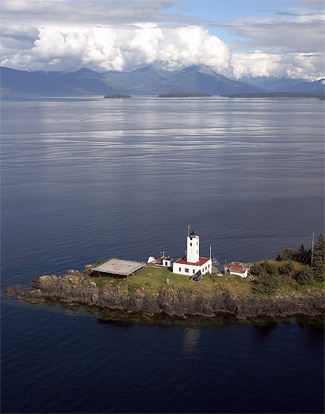 The last Coast Guard crew stationed at Five Finger Lighthouse left on August 14, 1984, making the lighthouse the first and the last Alaskan lighthouse to be manned.

Sometimes it takes separation from our loved ones to make us appreciate them and change our priorities. We value many things – money, success, power, knowledge, but even with all these things, without love, our lives can feel empty. But they don’t have to be if we remember that God still loves us, no matter where we are.

“For I am convinced that neither death nor life, neither angels nor demons, neither the present nor the future, nor any powers, neither height nor depth, nor anything else in all creation, will be able to separate us from the love of God that is in Christ Jesus our Lord.” Romans 8:38-39

*Information for this story came from lighthousefriends.com, by permission from Kraig Anderson.