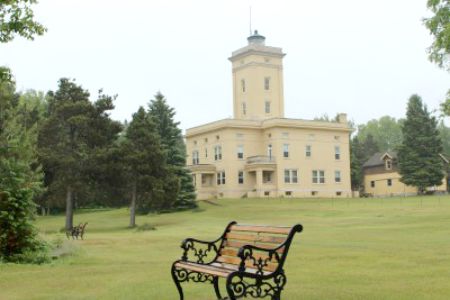 After 25 years of requesting a lighthouse at Five Mile Point on Lake Superior, the government finally approved the funds.

Nearby Sawtooth Reef had been the demise of many vessels traveling along the rocky shoreline of Michigan’s Upper Peninsula, requiring the need for a lighthouse. Forty-seven acres of land were purchased and construction began in 1917.

The result was a grand structure built of buff-colored brick consisting of a 70-foot tower surrounded by three separate apartments for three keepers. Each apartment had its own access to the second-floor of the tower. The apartments also had hardwood floors and their own cellars surrounding a central basement which housed the station’s hot central heating and water supply systems. 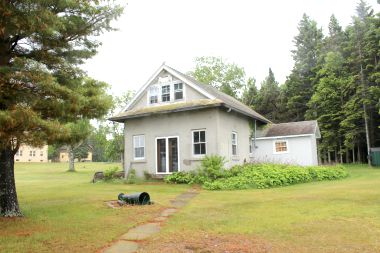 In addition to the lighthouse building, a fog-signal house, storehouse, boathouse, oil house and landing dock, all connected by concrete sidewalks were built at the station. The Sand Hills Light Station had no equal.

In 1919, William R Bennetts was appointed head keeper, and he and his wife Mary moved in, along with two assistant keepers. In June of that year, Bennetts activated the lighthouse’s fourth-order Fresnel lens for the first time. Keeper Bennetts remained the head keeper for twenty years, becoming the only head keeper the light ever had when the Coast Guard took over control of lighthouses in 1939 and decided to automate Sand Hills, eliminating the need for keepers. 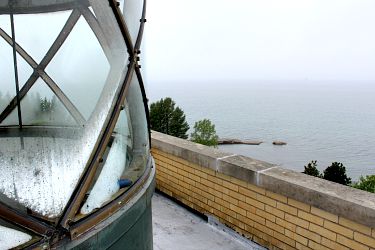 For the next five years, the lighthouse remained empty, but in 1942, 200 Coast Guardsmen occupied the grounds and buildings as a training site during World War II. A year later, the grounds were abandoned again, and in 1954, the use of radar determined that the light was no longer necessary and so it was decommissioned.

The site remained vacant until 1958 when the government sold the property to a private owner at auction. However, just a few years later, the owner put the property up for sale again and it was bought by William Frabotta in 1961.

For the next thirty years, the Frabotta family used the property as a summer vacation spot, using the fog house as their summer cottage because the main building had fallen into disrepair. Years of disuse and destruction by vandals had taken its toll on the once-splendid lighthouse, and extensive repair was needed.

However, in 1992, Frabotta undertook a major renovation plan. After a massive three-year remodeling, the building was reopened as an impressive bed and breakfast inn in 1995.

Now listed on the National Registry of Historic Places, the lighthouse is one of only twenty lighthouses in the United States that operates as a bed and breakfast. Today, another William and Mary (Frabotta), welcome guests into their Victorian-decorated lighthouse, eager to exhibit the result of their dedication and hard work. 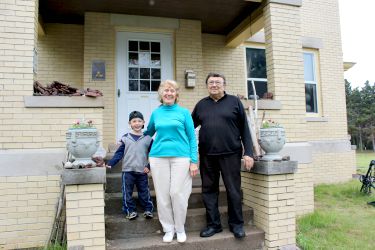 Sand Hills is once more the “Castle of the Keweenaw,” restored by caring and committed hands.

Sometimes I need restoration too. In those times, I turn to the Bible and pray the words of Psalm 51:12, “Restore to me the joy of your salvation and grant me a willing spirit, to sustain me.”