Santa Visits the Lighthouse – Love From the Sky

Home/Lighthouse Blog Category, Uncategorized/Santa Visits the Lighthouse – Love From the Sky
Previous Next

Santa Visits the Lighthouse – Love From the Sky 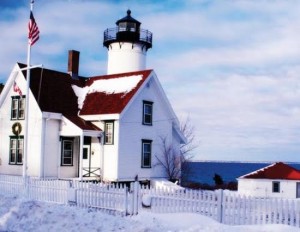 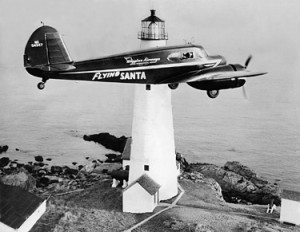 Every time five-year-old Seamond Roberts heard a plane, she’d ask her mother if it was Santa.

A plane? Isn’t Santa supposed to be in a sleigh led by eight reindeer? Perhaps in The Night Before Christmas, but for lighthouse families, Santa appeared in a plane.  Seamond’s father, Octave Ponsart, was the light keeper at Cutty Hunk Lighthouse in 1945 when Seamond’s mother heard about Edward Rowe Snow, the Flying Santa who dropped presents to lighthouse families. She wrote him a letter telling about her daughter and how much she’d like to have a new doll for Christmas.

Although Seamond’s mother mailed the letter in October, the little girl expected to see Santa’s plane any day afterwards. When the drone of a plane alerted them in December, the Ponsart family was relieved to see it really was the Flying Santa. The plane circled overhead and the people on the ground prepared to retrieve the packages, even by boat if they missed the island and fell into the ocean or the pond. Three packages fell – one landed in the pond, one hit the ground and one hit the huge boulders at the edge of the island.

The joyful family waved excitedly at the plane as it flew away, then ran to retrieve the packages and bring them inside. One by one the heavily-wrapped packages were cut open. The one that landed in the water was not damaged, as the wrapping kept the water out. It and the one that landed on the ground contained books, magazines, candy and other gifts, but no doll. Seamond could hardly contain her excitement as they opened the last box, the one that hit the rocks. But sadly, the doll had not survived the impact and it was in pieces. Seamond was heartbroken. Her dad, who could fix almost anything, tried to patch up the doll, so it became Seamond’s sick doll, complete with bandaids.

But the story didn’t end on that sad note. After Mr. Snow found out about the broken doll from another letter from Seamond’s mother, he determined to make it up to her somehow. In the meantime, Seamond’s father had been assigned to another lighthouse, the West Chop Light on Martha’s Vineyard, so the family had moved. That didn’t stop Santa though. In December 1946, he rented a helicopter and landed on the island to hand-deliver Seamond’s new doll to her.

Seamond never forgot the experience and the assurance she received that Santa really did care about her. He showed his love and concern for her by going out of his way and coming to her in person.

And isn’t that what Christmas is all about? God loved us so much, he wanted to come down and show us in person? He didn’t forget us, He hasn’t forgotten you. Will you remember Him this Christmas? Will you accept His gift of Love?

“This is how God showed his love among us: He sent his one and only Son into the world that we might live through him.” 1 John 4:9

Story from: Everyday Heroes, The True Story of a Lighthouse Family by Seamond Ponsart Roberts with Jeremy D’Entremont

For more information about the Flying Santa, see www.flyingsanta.com, who by the way, uses a helicopter now.