Saying Goodbye to the Lighthouse

Saying Goodbye to the Lighthouse 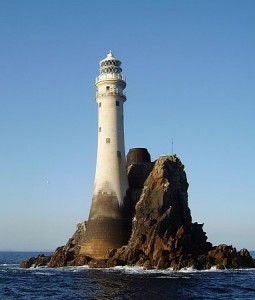 “Get a good look, Bridget. It’s the last sight of Ireland you’ll ever see.”

“It looks like a castle, don’t you think?” Bridget pointed to the tall lighthouse rising up from Fastnet Rock as their ship sailed past.

“Aye. It’s a beautiful sight, it is.” Ellen nodded as the two sisters squeezed together at the ship’s railing to view the gracious lighthouse.

Tears trickled down the girls’ faces, matched by those of the other women crowded on the ship.

They were saying goodbye to Ireland, to their homes, their families, and most important, their struggles to survive in a country ravaged by famine.

“In America, we’ll have our own castles,” said a woman nearby.

“There are no princes to marry in America, silly girl,” another woman chided.

“I’ll be happy with a comfortable place to lay my head and good, honest work for my hands,” Ellen affirmed with a defiant nod of her head.

“Do you really think so, Ellen, that we’ll find work in America?” Bridget peered up at her sister.

“The good Lord will provide. He’ll take care of us, just trust him.’

The sisters watched the lighthouse disappear from view. It was time to stop looking back. Their future lay ahead.

Fastnet Lighthouse, off the southernmost tip of Ireland, was the last thing Irish emigrants saw of their country. Fastnet Rock became known as “Ireland’s Teardrop” to the thousands of Irish who left Ireland to start new lives in America.

Sometimes it’s hard to leave the past behind, but we have to if we want to move forward. Is there something in your past you’re still hanging on to, something you need to let go?