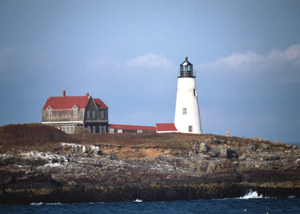 Capt. Cornelius Howland knew what it was like to be a sea captain. At the age of 18, he was captain of his own ship. For years he sailed the seas until he took a position as lighthouse keeper of Clark’s Point Lighthouse in Massachusetts.

So did Amos Baker. From the age of twelve, he sailed on his father’s ship as part of the crew. As a young man, he too, captained his own ship. But when he grew older and decided to settle down in one place, he became the keeper of the New Bedford Light.

The first keeper at Wood Island Light, Benjamin Cole, had also sailed the seas, captaining his own vessel, as did several of his successors at the lighthouse.

And the list goes on. Many of the nation’s first lighthouse keepers were former men of the sea. What skills did a man who had lived on ships possess that would make him a good choice for tending a lighthouse, a land-based occupation?

In A Book of New England Legends and Folk Lore in Prose and Poetry published in 1888, author Samuel Adams Drake relates what a former sailor turned keeper at Thacher Island Lighthouses told him.

“We know how eyes may be strained in thick weather at sea to get hold of the light; and that makes us painfully anxious to keep it up to its full power, especially when frosts or sea-scud dims the lantern; for that is the very time when minutes count for hours on board ship.”*

These men knew what it was like to be at sea and need the help of lighthouses to guide them and warn them of hazards. They understood how unpredictable the weather could be, and the importance of finding their way through a stormy ocean.

In other words, these keepers could mentally put themselves in the sailors’ situations because they had been there themselves. Because of their former experiences, they tended their lights the way they would have wanted them tended when they were sailors. With such empathy, these keepers cared deeply about the efficiency and maintenance of their lighthouses to provide safety for those out at sea.

In the same way, our former experiences can help us understand when others go through similar situations. Because we’re familiar with the struggles or feelings of the circumstances, we know better how to help – we know how we would like others to treat us during those times.

Even if we haven’t experienced the situation ourselves, God has given us a way to help by imagining being in those circumstances. In what is commonly referred to as The Golden Rule in the Bible, Jesus says, “Do to others as you would have them do to you.” Matthew 6:31

What a difference we could make in the world if we treated everyone the way we’d like to be treated.