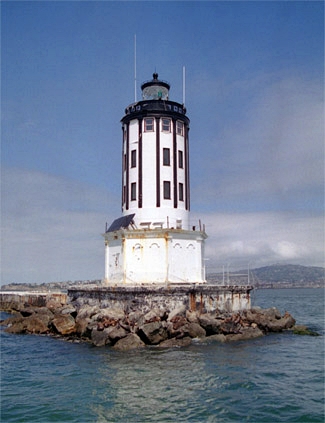 Lighthouse keepers develop a relationship with the sea and learn to appreciate its personality. They also acquire an understanding of the creatures that live within it.

Marine animals can provide food for the keepers, but they can also provide company.

Along the west coast of the United States, lighthouse keepers are very familiar with seals and sea lions.

At Angel’s Gate Lighthouse in California, also known as Los Angeles Harbor Light, the three male keepers welcomed the visit of a seal pup that brought entertainment and delight to their mundane duties. “Charlie,” as they named him, appeared in the engine room of the lighthouse one day, apparently attracted by the refuse the keepers tossed out. 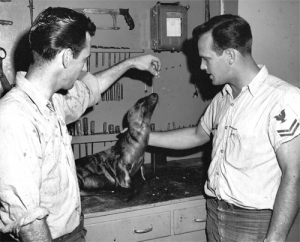 Charlie the Seal and his friends, photo courtesy USCG

Since the Coast Guard allowed pets at lighthouses, the men fed Charlie table scraps and even caught fish for him. Eventually, the little seal followed them everywhere, even into the tower itself.

On the remote Farallon Islands some twenty miles from the coast of San Francisco, there are few inhabitants, except when the migrating seal herds appear for their annual visit. During that time, thousands of seals line the shore where they have their young before traveling on.

When Keeper Max Schlederer was assigned to the Southeast Farallon Island Lighthouse, he could only communicate with his girlfriend Jackie by writing letters. One night while on duty, Max heard the voice of a crying seal pup. When he found the pup, he realized it had been left behind by the herd because it was blind.

Max took the little seal into the lighthouse and put it into a tub of water. He began to apply poultices and boric acid solutions to the seal’s eyes. The medication worked and the seal regained its eyesight. The baby seal was too young to feed on its own, so the keepers started feeding it, first with bread and milk, then fish and abalone as it grew larger. Oscar must have thought Max was his mother, following him around and even sleeping under the bed in his tub. 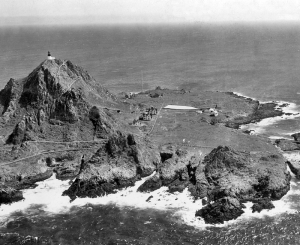 Max’s letters to Jackie were filled with stories about Oscar. In one, Max described how he ended up teaching the seal to swim. When Max first put Oscar back into the sea, the seal sank, and Max had to dive in to save it. Thus began swimming lessons as Max showed Oscar what its mother would have taught him.

When Max proposed to Jackie, she eagerly accepted, having been impressed by his kindness and gentleness in the way he cared for Oscar. They married and Jackie moved to the lighthouse with Max. Each spring they watched the seals return and hoped that Oscar, now grown and reunited with the herd, was one of them. 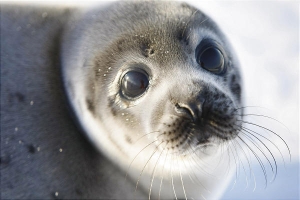 “The righteous care for the needs of their animals,” Proverbs 12:10

*For more information on this story, see ahttp://www.lighthousedigest.com/Digest/StoryPage.cfm?StoryKey=391