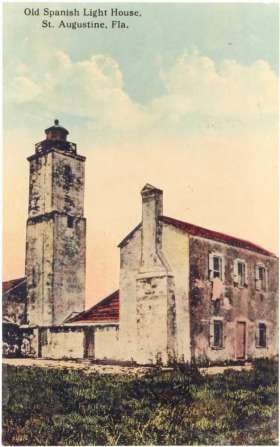 Maria shielded her eyes from the sun’s glare as she gazed up at the coquina stone lighthouse.

Above her, husband and lighthouse keeper Joseph perched precariously on a wooden scaffold.

“Joseph, you be careful up there!” Maria called out in their native Minorcan language.

“Don’t worry, Maria. I’ve painted the lighthouse before.” Joseph peered down at her, wielding a paintbrush.

Maybe so, but Maria worried anyway. She shook her head. If only one of their son-in-laws were there to help him. But only three of their eight children were still at home, and Joseph wouldn’t let Nicholas, their youngest, to do the job. Joseph was stubborn when it came to taking care of the lighthouse. He wanted to make sure everything was done correctly, even whitewashing the sixty-foot tower. Besides, he knew it was a dangerous job and didn’t want to put his children’s safety in jeopardy.

As she turned to go back inside the keeper’s house, a burst of wind gusted across the water, blowing her skirts and knocking her off balance. A glance at the ocean revealed a storm offshore. Alarm raced through her as she looked back up at her husband suspended above her.

The wind increased, and the scaffolding began to swing and beat against the tower. The bucket of whitewash slid off, smashing into pieces below as it splashed splotches of white at random.

Joseph tried to maintain his balance, clinging to the rope holding the board he was on. Maria held her breath while she watched, hoping the wind would die down. But without warning, the rope broke. Maria screamed as her husband tumbled down, hitting the roof of the oil house before landing on the hard ground.

Joseph died from his fall. In an instant, Maria became a widow with three children to provide for.

She had no income because she was not the appointed keeper. How would she survive? Where would she live? She was a woman, and there were no women keepers, as far as she knew. Keeping a lighthouse was considered “man’s work,” and her husband’s salary of $400 a year was a desirable income for many able-bodied men. 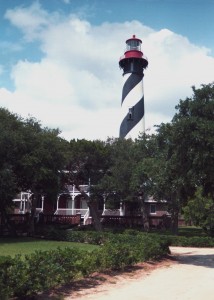 Yet, Maria knew the work and the importance of maintaining the light that guided mariners to the St. Augustine Harbor past the island at the juncture of the Matanzas River and the Atlantic Ocean. Joseph’s family had been lighthouse keepers on the island for years, and Maria was familiar with the duties required. She also knew her husband’s devotion to the lighthouse.

So Maria sought the appointment as Joseph’s replacement, and with the citizens of St. Augustine uniting to support her, the request was granted. On December 29, 1859, Maria Mestre de los Dolores Andreu became the first official woman lighthouse keeper in the state of Florida and the first Hispanic-American woman to command a United States shore installation.

Becoming a lighthouse keeper had not been Maria’s desire when she married Joseph. Yet when her circumstances changed, she adjusted to her new role.

Often we face circumstances that weren’t part of our plan. Sometimes we’re placed in situations that require us to take on responsibility we never thought we’d have to handle. Yet, we know there’s no one else who can do it, and it’s up to us to step out and take charge. And maybe that’s part of another, bigger plan.

I’m reminded of the story of Queen Esther in the Bible, who had hid her true heritage from her husband the king. But when her people were about to be killed, her uncle asked her this question: “Yet who knows whether you have come to the kingdom for such a time as this?” Esther 4:14b

“For such a time as this” may apply to a place in our lives right now as well. Maybe you’ve been put where you are right now for a special reason. What will you do about it?