Spring at the Lighthouse

Spring at the Lighthouse 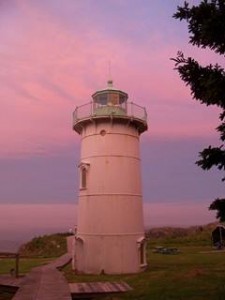 “Mother, will we have spring this year?” Seven-year-old Ruth Corbett stared out the kitchen window at the patches of snow on the ground beside the keeper’s house.

Her mother laughed. “Of course we will Ruthie. We’ve just had a longer winter than usual.”

“But how do you know for sure? Everything is either covered with dirty snow or brown patches of grass.”

“We just know spring will come. We haven’t had any snow in a week, so maybe it’s just around the corner.”

“I hope so. I’m tired of looking at this drab, boring scene.”

Ruth pulled on her coat and headed outside to the barn to look at the new kittens that had been born just a few days before. The sound of a hammer came from the back where her father, lighthouse keeper Willie Corbett had a workshop. Curious, she strolled back to see what he was doing.

“What are you building, Papa?”

Several boxes were lined up along the shelf next to her father as he drove a nail into another box.

“Birdhouses. Gotta get them up, so the birds can make their nests.”

“But how do you know the birds will come back? Maybe the birds decided to stay south where it’s warmer.”

Father chuckled. “Seems like they would, eh? But they always come back to the same spot to build their nests.”

Ruthie pointed to a large box with three levels. “Why is this one bigger?”

“That’s for purple martins. They like to be around water.” Father pointed to the others. “That one there’s for wrens and the other ones are for bluebirds.”

“How do they know which one to use?”

Ruthie shook her head. Mother had said the same thing. As she pet the new kittens, she thought about how so many baby animals were born in the spring.

She stepped back outside and watched the fog roll in across the water. When would she ever see the pretty colors of spring? When would they have flowers again?

Just then two of her older brothers strolled up. One of them pointed back behind him and said, “Pretty sunset over the harbor this evening. Too bad you missed it.”

Ruthie sighed, wishing she’d been with them to see the colors of sunset. But as she turned around, she saw that the fog had changed color and everything around them was pink!

“Look! The lighthouse is pink!” Ruthie pointed to the normally white tower.

Ruthie ran around the yard, thrilled with the change. Everything was pretty, even the snow that had looked dirty before. Maybe Spring really was just around the corner. 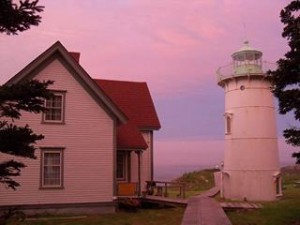 Keeper’s house and lighthouse in pink, Photo by Marilyn Turk