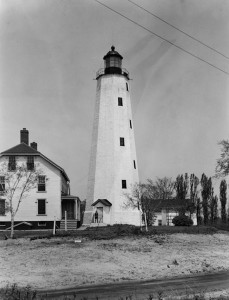 Mozart? Beethoven? Jefferson? I remember hearing of them many years ago, but haven’t heard anything about them for a while. They say “Time flies.” But for me, it seems to stand still. Yet, everything around me has changed. As the oldest lighthouse in the United States, I’ve been in the middle of some of these changes.

Back in 1764 when I was first put into use, this place was just a colony of England.  Little did I know that in a few years, I’d be in the middle of a fight between two countries when the Revolutionary War broke out, and both sides wanted me. Not without damage, I survived, yet a few years later, found my-self in the middle of controversy between two states, New York and New Jersey. Finally, the federal government took over my care. 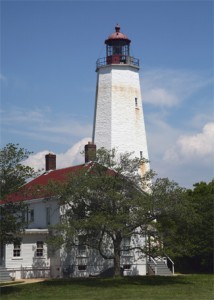 Yes, after all this time I’m still here, a bit out of place in this new world. I don’t look much different than I did before, thanks to new paint. But I’ve had some setbacks when my old parts had to be replaced. Gears rusted, wood rotted and lenses broke. You could say I’m still the same old lighthouse, but inside, I’m new.

“Therefore, if anyone is in Christ, he is a new creation; old things have passed away; behold, all things have become new.”  2 Cor. 5:17