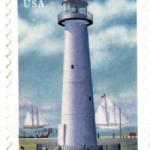 A hurricane approaches and people are warned to evacuate. Run away! Leave! Seek shelter from the storm!

There have been times when I wanted to run away, to evacuate and leave when life has gotten rough – to wax poetic, to flee from the storms of life. Problems mount, family needs, health declines, finances crumble – sometimes in oncoming waves that threaten to drown. The waves rise higher and higher as I tread to keep my head above water.

All along the coastlines, lighthouses have withstood centuries of storms. In times past, people sought refuge in them, seeking safety in the most permanent structure known. Storms have buffeted the lighthouses, often causing damage, but strangely, the buildings have stood when none others survived.

One example of that is the Biloxi Lighthouse in Mississippi. Built in 1848, it still stands, despite being ravaged by Hurricane Camille in 1969 and Hurricane Katrina in 2006, wiping out the Gulf Coast of Mississippi.

Although we now know to take heed to these warnings and move away from the storms, we can’t always do that with the storms in our lives. Like the lighthouses, we have to stand firm and weather the storm, knowing that eventually, the storms will pass.

The temptation to run away will appear, but my role is to be like the lighthouse. The Bible has many references to standing firm. One of my favorites is 1 Cor. 16:13, “Be on your guard; stand firm in the faith; be courageous; be strong.” The storms will come, but the lighthouse will stand to shine another day.

Brace yourself. Stand firm. Shine on.