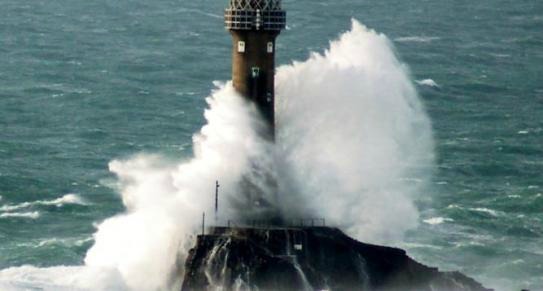 Needles, Eddystone, Longships, Bishop Rock – these well-known lighthouses in the UK are a few of the country’s “rock” lighthouses.

The name “rock” denotes that the lighthouse is offshore and not on land.

In fact, many of these were built on rocks barely large enough for the lighthouses, yet so located to warn ships of the dangerous reefs just below the water’s surface.

Lighthouse keepers stationed at rock lighthouses had a different set of circumstances to adjust to in their jobs, such as more compact quarters and unique transportation to and from the towers.

One of the most frightening events a new lighthouse keeper experienced was being in a rock lighthouse during a storm.

“The sea rolls in with a relentless deepening swell, this massive weight of water hitting the tower with an awesome crash before climbing higher up the structure, often rolling its way to the very top. The tower quivers and shakes violently, whilst strange, loud, almost metallic sounds reverberate through the structure, seemingly coming from the very depths of the rock itself. As the water recedes back down the tower, it sucks the very air from within via the window supper vents; water its glass as if it isn’t water at all, but something much more solid.”

Mr. Partridge goes on to say, “In some cases, the sea crashes over the top of the lighthouse while the structure shakes and banks, dishes rattle and the noise of the sea is like a loudly roaring lion.”

Under these circumstances, the windows were closed and locked to keep out the water. “When the sea hits and climbs, all goes dark inside as the daylight is interrupted.”

A terrifying experience for certain. What thoughts must go through the keepers’ minds? Besides worry about broken windows and water leaks, no doubt they wondered how long the storm would last, counting the minutes until the sea calmed again. But foremost on their mind would be the stability of the tower. Would it withstand the pounding of the gigantic waves?

But the storms passed and peace resumed. The tower continued to stand as it had for over 200 years, securely embedded to the rock as it survived another attack from the sea.

As Mr. Partridge states, “Such experiences only lead one to pay homage to those Victorian engineers who designed and built such structures.”

Sometimes I feel like one of those rock lighthouses being attacked by monster waves. Wave after wave seems to hit me, and I wonder when the storm will end, and if I’ll survive the attack.

It’s those times when I feel weak that I turn to the Master builder and trust him to hold me up and keep me from collapsing. And He does. Then peace and calm returns.

“Truly God is my rock and my salvation; He is my fortress, I will not be shaken.” Psalm 62:6