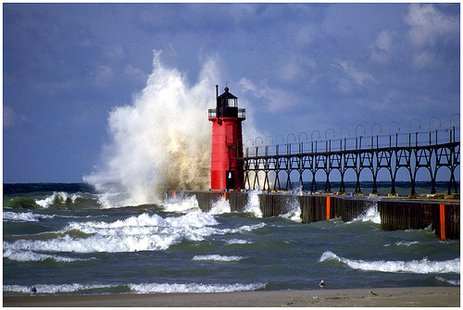 “Mr. Donahue, we appreciate your service to our country, but we question your ability to carry out the duties of a lighthouse keeper. The position requires strength and coordination, which would be very difficult for a person crippled like yourself.”

James Donahue read the letter and crumpled it in his hand before tossing it into the fireplace. After regaining his composure, he penned these words to the Lighthouse Board.

“Gentlemen, it is true that I was twice injured in the war, the second time losing a leg in the Battle of the Wilderness, however, I am not crippled, as you assert. I am capable of carrying out any and all duties required of a lighthouse keeper and will gladly prove it to you if you will give me the opportunity to serve my country in this manner.”

The Board relented, and James Donahue won his appointment as a lighthouse keeper in 1874, assigned to South Haven Lighthouse on Lake Michigan. The lighthouse was built at the end of a pier that marked the entrance to the Black River. During Donahue’s thirty-five year tenure, the pier was extended twice – from 75 feet to 200 feet and then to 400 feet, each time moving the lighthouse farther away from the shore and the keeper’s dwelling.

An elevated wooden walkway extended from the shore to the lighthouse to keep the keeper from being washed off the pier by waves. Donahue made his way across the walkway every day in all types of weather – wind, rain, or ice. He personally constructed a handrail to aid his progress in reaching the tower safely. 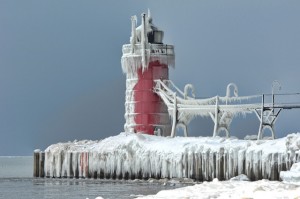 Donahue performed all the expected duties of a lightkeeper such as keeping a detailed log, maintaining the light, painting the tower, and sounding the hand-operated fog horn for hours when necessary.

Even more amazing is Donahue’s record of saving fifteen lives, sometimes diving into the water to do it. Two of those he saved were his own sons.

Donahue overcame many obstacles to perform his duty, including the death of his wife as he noted in his log on July 3, 1875. Yet despite physical and emotional trials of his own, as well as the unpredictable challenges of the weather, he served as lightkeeper at South Haven longer than any other keeper.

Was he crippled because he didn’t have a normal body? Would he be called handicapped today? Perhaps by human standards he would. But human standards aren’t always correct.

“My grace is sufficient for you, for my power is made perfect in weakness.” 2 Cor. 12:9

“I can do all things through Christ who strengthens me.” Philippians 4:13