The Castle of the Straits

Home » The Castle of the Straits
Previous Next

The Castle of the Straits 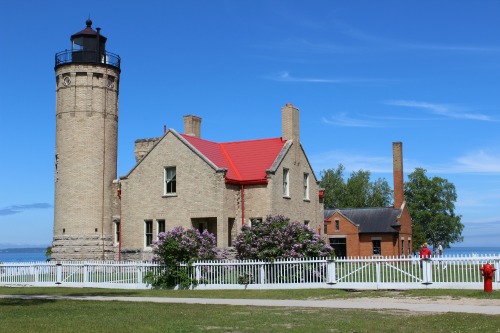 “Good afternoon, ladies, gentlemen. Welcome to the Old Mackinac Lighthouse. Would you like a tour of the tower?” The lighthouse keeper, dressed in his spiffy uniform gestured toward the stairs leading to the lantern room.

The day had been unusually busy with sightseers eager to climb the steps of the lighthouse. It was a Sunday afternoon, and many people came to the park for a picnic after church, expecting to visit the lighthouse as part of their entertainment.

At many lighthouses, accommodating tourists was an expected duty for the light keepers. But for Old Mackinac, the responsibility was even greater. Situated beside historic Michilimackinac Park, which existed before the lighthouse was built, the castle-like structure attracted more tourists than most lighthouses. Conveniently located in Mackinac City, Michigan, the building was easier for people to get to than more remote light stations.

Yet, keepers who were appointed to Old Mackinac were happy to add the responsibility of tour guide to their daily duties. The benefits of the position outweighed the inconvenience. For one, being so close to town meant their children could attend the local school, the family could worship at the local church, and food and supplies were readily available.

In addition, the keeper’s living quarters were above average. Referred to as the “Castle of the Straits,” the lighthouse was built in 1889 to complement the McGulpin Point lighthouse as an aide to mariners navigating the Straits of Mackinac between Lake Michigan and Lake Huron. The impressive stone structure with its attached house served as a home for the principle keeper, as well as, the assistant’s family. Built of Cream City brick and trimmed with Indiana limestone, the large duplex featured twin parlors, kitchens and living rooms, with three bedrooms on each unit’s second floor. The lighthouse itself was a square tower topped with battlements, giving it a castle-like appearance. 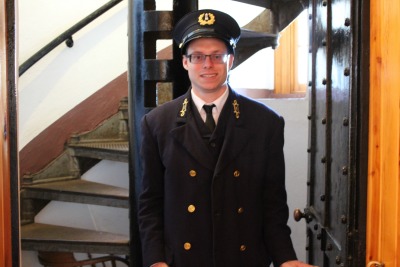 No wonder the lighthouse had only four keepers during its sixty-five years as an active aid to navigation. Assignment to Old Mackinac was one of the most desirable appointments for lighthouse keepers, and one which they served with great appreciation.

The opening of the Mackinac Bridge in 1957 resulted in the decommissioning of the lighthouse and the end of an era for lighthouse keepers at Old Mackinac. But thanks to the incorporation of the lighthouse grounds into Mackinac State Historic Parks in 1960 and the subsequent restoration, the facility is now open to visits from tourists once again, greeted by friendly keepers as they were in the past.

“Offer hospitality to one another without grumbling.” 1 Peter 4:9