The Eyes of Thacher Island

The Eyes of Thacher Island 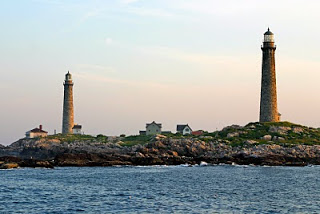 In 1605 Samuel de Champlain saw the island.  Captain John Smith saw it in 1614. But the rocky isle had no name until a terrible storm occurred in 1635 and Englishman Anthony Thacher and his wife, the only survivors of a shipwreck that took the rest of his family, managed to reach the island. To compensate Thacher for his loss, the colonial government awarded him the 50-acre island “at the head of Cape Ann,” Massachusetts, and the island became known as Thacher Island.

After years of shipwrecks on the dangerous ledge near the island, ship owner John Hancock petitioned the court for a lighthouse. The government then bought the island back in 1771 to build a light station on it.

The two 45-foot wood and stone towers, about 900 feet apart, were lighted for the first time on December 21, 1771. The twin lights soon acquired the name “Ann’s Eyes.”

Two new taller granite towers were built in 1861 to replace the original lighthouses and new first-order Fresnel lenses were installed, making the lighthouses visible twenty-two miles out at sea.

In December of 1864, an assistant keeper became ill and required immediate medical care, so Keeper Alexander Bray and his other assistant left the island to carry the ailing man to the mainland. The trip was intended to be short, but a fierce blizzard blew in, keeping the men from returning.

Keeper Bray’s wife Maria realized the men would not be coming back in time to tend the lighthouses, so she took it upon herself to keep the two towers lit,  braving the snowstorm to walk the distance between the towers several times during the night. Each time, she climbed 148 steps in each lighthouse carrying fuel, trimmed the wicks, and cleaned the lantern panes. Maria Bray performed these tasks for two nights until her husband was able to get back to the island, guided by Cape Ann’s eyes.

How appropriate that these lighthouses were referred to as “eyes,” keeping watch over the mariners to warn them away from danger. And how comforting to know that God keeps watch over us as well.

“The Lord will watch over your coming and going both now and forevermore.” Psalm 121:8