The Fear of a Lightkeeper’s Wife

The Fear of a Lightkeeper’s Wife 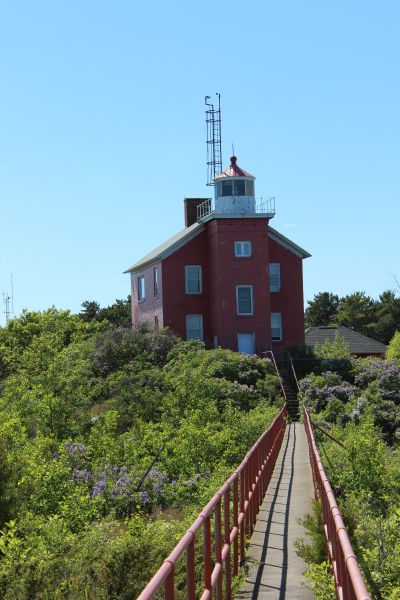 Anna wasn’t cut out for this.

Nothing in her young life had prepared her to be a lighthouse keeper’s wife. Born in Sweden, she had come to the United States as a teenager and married Robert Carlson, newly appointed assistant keeper at Outer Island Light in the Apostle Islands, when she was twenty-one.

Anna was a city girl and unaccustomed to the rugged, lonesome life she found herself in. On the island, she had three people to talk to – her husband, the older head keeper, and a fisherman who came that summer and lived in a shack down the shore.

Even going ashore by sailboat to the mainland which was forty miles away was frightening to the young bride. At home at night, she’d look out the window and see nothing but dark water and the light from the lighthouse.

Anna didn’t even know much about housekeeping when she got married and wasn’t used to the work involved. Fortunately for her, the kind, older keeper taught her how to cook. Over time she learned how to do the housework as well.

Just a few years later in 1893, Robert was promoted to head keeper of the Michigan Island Light. By that time, Anna and Robert had three children – a two-year-old daughter and twin nine-month-old boys.

During their first year on the Michigan Island, Anna endured a terrifying experience that threatened her stability, but strengthened her in the end.

They’d decided to stay all winter on the island instead of going to the mainland which was customary for keepers and their families when boat traffic ceased on Lake Superior for the season. Robert’s brother was his assistant, and they had a hired girl who promised to stay with them during the winter. The girl apparently changed her mind and sneaked away to the mainland with some fisherman and didn’t come back. 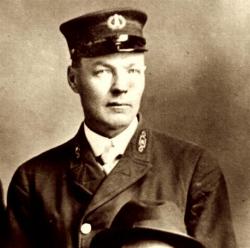 One day the men decided to go fishing. When they took the dogs and left the house, Anna ran around and locked all the doors and windows, she was so scared of being alone.She busied herself with housework while they were gone, then fed the children lunch and prepared an early dinner, expecting the men to come home hungry. Then she waited, watching the sun go down across the water and the stars come out. She kept stoking the fires, knowing the men would be cold when they returned.

It never crossed her mind that they wouldn’t return. The wind began blowing with gale force, but still she waited. Soon it began to snow. She put the children to bed and continued to wait for the men to come home.

“All night long I sat by the fire, terror clutching my heart. I could not believe they would not come. Every time the wind rattled the branches of the trees around the lighthouse I would start up, expecting to hear my husband’s voice.”

When morning finally came, Anna was on the verge of hysteria. Still, she had to care for her children. She’d never milked their cow since her husband did that chore, but the children needed milk. She finally managed to get some milk from the cow, despite mistrust on both sides of the udder.

She fed and watered the animal, then fed the chickens and went back to the house to wait. Another long day and night passed and Anna managed to survive the fear that threatened to overwhelm her. She even hung a white sheet from the top of the tower as a distress signal, but there was no one out to see it at that time of year. 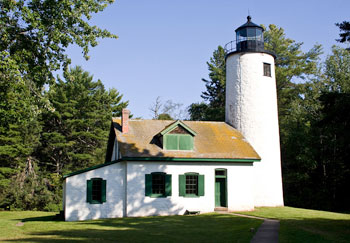 The third day, she couldn’t stand being in the house anymore and leaving the twins with their big sister, scrambled down the icy, snow-covered trail to the shore, the bitter cold stinging her face, to search the for a sign of her husband. Hours later, a distraught, discouraged Anna returned to the house where she found the children asleep.

Anna fell to the floor, sobbing and screaming until she was exhausted as she faced yet another sleepless night without the men’s return.

The fourth day the winter haze had cleared, but it was bitter cold. She still had the children to care for and a reason to keep going. She was in her kitchen that afternoon when she heard her husband’s voice.

Apparently, Robert knew how afraid she was and wanted to reassure her he wasn’t a ghost. Anna fell into his arms, sobbing and laughing.

He told her the ice they were on had broken up, and they were in danger of blowing farther away when the gale began. The ice had finally pushed up against Madeline Island. They had walked and jumped from floe to floe to reach land, until their shoes were almost off their feet and the feet of the dogs were bleeding.

On the island they found some flour in a fisherman’s shanty and some dry wood and kindling. They built a fire and boiled the flour to make a gruel which they shared with the dogs. Finding an old boat on the beach, they worked to make it usable, then pushed off and  rowed the eight miles back home to Michigan Island. The two men suffered frostbite and two weeks passed before they recovered from their ordeal. 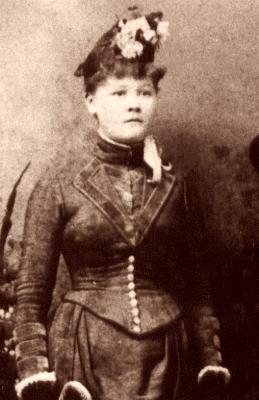 Years later, Anna said, “A woman can learn to do anything if she sets her mind to it.”

Sometimes we face situations that, like Anna, we don’t think we can survive. But it’s usually in those tough times that we grow stronger. If you have such a time facing you, remember these words of hope:

“I can do all this through Him who gives me strength.” Philippians 4:13