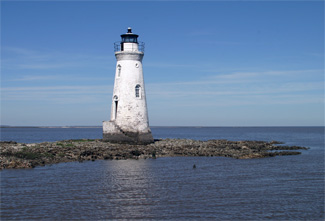 Three loud blasts sounded from the ship’s horn as it sailed past the lighthouse. Sailors stood on deck waving back at the girl who waved at them.

For over forty years, Florence Martus greeted each passing ship by waving a towel during the day or a lantern at night. Born at the Cockspur Island lighthouse when her father was the keeper, she moved with her brother to the Elba lighthouse when he became its keeper after her parents died.

Life at the lighthouse was pretty lonely for eighteen-year-old Florence, with no neighbors nearby and no younger siblings. However, when she began waving at ships, she discovered a way to find friends.

Over the years she gained a worldwide reputation for being “The Waving Girl,” from ships that passed the lighthouse on their way to the port in Savannah, Georgia.

Letters and gifts arrived at the lighthouse to thank Florence for her warm greeting. She received fruit, plants, jewelry, exotic birds and even a llama from Peru as grateful sailors reciprocated. Anticipation replaced loneliness as Florence looked forward to welcoming each ship.

When Florence’s brother retired, they moved to Savannah. On her 70th birthday, she was honored by a citywide birthday party and the unveiling of a bronze statue of The Waving Girl, which still stands by the waterfront.

Florence’s life echoes the wisdom of an old proverb. “A man(person) who has friends must be friendly.” Proverbs 18:24 NKJV