The Heroes of the Pea Island Lifesaving Station

The Heroes of the Pea Island Lifesaving Station

Richard Etheridge learned about the sea while growing up on the Outer Banks – how to fish, how to pilot boats, and how to search the beach for debris from wrecked ships. From his master, he learned how to read and write.

When Union troops took control of the Outer Banks in the Civil War in 1862, the island became a refugee camp for slaves. In 1863, Richard joined other former slaves who enlisted in the Union Army, serving as a prison guard at a POW camp before seeing combat in 1864. He was promoted to sergeant two days after his all-black unit was victorious in an important battle.  Although Richard proved his worth as a soldier, he encountered unfair treatment by his white peers.  After the war, he became a buffalo soldier in Texas.  The war was over, but black soldiers still endured abuse by going months without pay and having their rations reduced.  Richard learned that despite having equal rank, he had to work harder and better to prove himself. 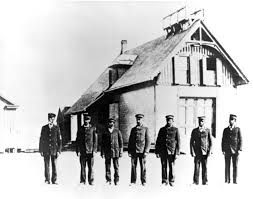 Richard left the service in 1866, returned to the Outer Banks and married. He joined the newly formed Life-Saving Service and served at Oregon Inlet and Bodie Island.  IN 1879, after a series of maritime disasters off the Outer Banks in which 188 lives and millions of dollars were lost, the Life-Saving Service was blamed. The Revenue Cutter Service investigated, firing the white keeper at the Pea Island station for negligence. Richard Etheridge was appointed in his place, the first black man to hold the rank of keeper of a life station in the nation.

The LSS inspector who appointed him received criticism for his appointment, but responded by saying, “Etheridge is thirty eight years of age, of strong robust physique, intelligent and able to read and write sufficiently well to keep the journal of the station. He is one of the best surfman on this part of the North Carolina coast…I am fully convinced that the interests of the Life-Saving Service here, in point of efficiency, will be greatly advanced by the appointment of this man to the Keepership of Station No. 17.”

Under the racial standards of the times, the crew under his command had to be all-black, thus making the Pea Island Life-Saving Station the first all-black life-saving station in the country. Richard knew his crew would be under tight scrutiny and any error might be met by dismissal for any or all of his men. As a result, he developed vigorous training of ten hours a day, seven days a week such as unhitching the mules and pulling the boat wagon through the soft sand and swimming miles through the cold waters of the Atlantic. 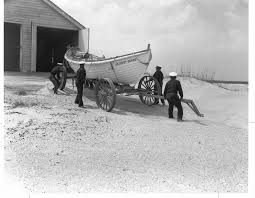 That training paid off in October 1896 when a distress call was received from a schooner grounded offshore during an intense storm. Fighting huge waves, the crew launched the surfboat but could not reach the schooner E.S. Newman. So Etheridge tied two of his strongest surfmen together and connected them to shore by a long rope. The men fought through the water and reached the schooner, bringing the captain, his wife, young son, and the whole crew to safety, swimming back and forth from the beach to the schooner ten times.

Days after the rescue, the schooner’s captain found a piece of the wrecked ship which displayed the vessel’s name and gave it to the crew to show his gratitude. For a hundred years, that piece of debris would be the only award given to the Pea Island Crew.

Etheridge served as keeper for twenty years before becoming ill and dying at the station at the age of 58. The crew of Pea Island continued to be manned by an all-black crew through World War II before the station was decommissioned in 1947.

In 1996, the Coast Guard awarded the Gold Life-saving Medal posthumously to the keeper and crew of the Pea Island station for the heroic rescues from the E.S. Newman. In August 2011, the USCGC Richard Etheridge, the second of the United States Coast Guard Sentinel-class cutters, was launched, named in honor of a heroic enlisted member of the Coast Guard. 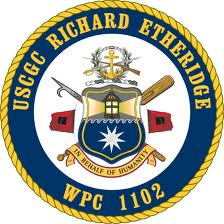 Etheridge and his crew risked their lives to save others without regard to the race of those they saved. Wouldn’t the world be a better place if everyone thought that way?

“Do not seek revenge or bear a grudge against anyone among your people, but love your neighbor as yourself.” Lev. 19:18