The Hope of Grace

The Hope of Grace 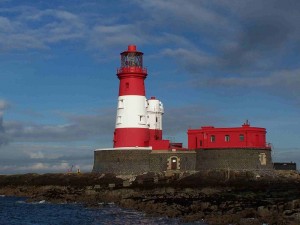 “Grace!” Wake up! I need you to help me tie things down!” Lightkeeper William Darling gently shook his sleeping daughter.

Grace struggled to open her eyes, then heard the alarm in his voice and remembered her older brother wasn’t home to help. Sixteen-year-old Grace jumped out of bed, threw on some clothes, and hurried to follow her father down the lighthouse steps.

The waves were rising higher as they worked quickly to secure everything, including their fishing boat.

“That’s done,” Father said as they tied the last knot. “All we can do now is hope and pray the storm doesn’t tear them away.”

Even though it was still some time before daylight, Grace couldn’t go back to sleep. Instead, she stood by her third-story bedroom window, watching the storm grow furious outside. As sunlight grayed the sky, she thought she saw a large black shape on a small island called Big Harcar Rock. Was it a shipwreck? She ran to get her father.

“Father! I believe there’s a ship wrecked out there!”

The two grabbed a telescope and searched the rocks for signs of life.

“Poor souls. Looks like the ship broke in half and only the bow is left. Father shook his head. “I don’t believe anyone survived, Grace.”

Grace refused to give up hope and continued to stare out the window, watching for movement. Around 7:00 in the morning, Grace saw activity on the rocks. There were survivors!

Once again, she ran to get her father. “Father, there are survivors! I saw them! Please, we must go get them!”

“Grace, the sea is too treacherous to attempt it. Our boat might capsize in these waves.”

But Grace was already down the stairs and headed for the boat. “Father, we can do this! We must try!”

The lightkeeper calculated the only way to access the rocks was to make a circuitous approach and use the tides to help them. With tremendous physical effort, he and Grace approached the rock, finding nine survivors – one woman and eight men. There were too many to take at once, so they took the woman, two of the weakest men, plus two strong crewmen to help row the boat back. Grace steadied the boat while her father helped them in. Once those people were safely deposited at the lighthouse, the keeper went back for the other four, rescuing all nine.

As a result of Grace Darling’s determination to save the survivors, word spread quickly and the country hailed her as a public hero. Grace, however, refused to take credit for her actions, instead declaring the rescue was not due to her own efforts but the power of God. That power lay not only in her physical strength, but also in the hope she held onto so that others might live.

“May our Lord Jesus Christ himself and God our Father, who loved us and by his grace gave us eternal encouragement and good hope,encourage your hearts and strengthen you in every good deed and word.” 2 Thess. 2:16-17

What do you hope for? At Christmas, are you putting your hope in God or something else?