The Lady Who Was a Lighthouse

The Lady Who Was a Lighthouse 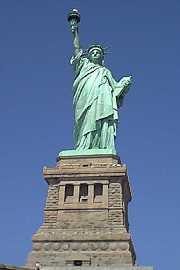 Although the lady is 125 years old, she’s still standing tall and proud at the entrance to New York’s Harbor.

Famous for her imposing stature and her regal form, she has represented freedom to thousands of immigrants. The people of France named her “Libertas,” after the Roman goddess for freedom, when they built her and shipped her over as a gift for the United States.

She holds a torch in her right hand representing enlightenment or progress and in her left arm rests a tablet inscribed with the date of American’s Declaration of Independence, July 4, 1776. Since her  establishment on the island leading into the harbor, thousands of ships have hailed her as their welcome to the country.

She retains another unique position in that she was considered a lighthouse and governed by the US Lighthouse Board from 1886 to 1901 and owns the distinction of being the first lighthouse lit by electricity.  Her torch, held 305 feet in the air, contained nine electric arc lamps and could be seen 24 miles out to sea. In fact, the first lightkeeper, Albert Littlefield, received a higher salary than any other  lightkeeper because he was familiar with the “new” technology.

Although the torch was extinguished many years ago and her status as a lighthouse was removed, flood lighting was installed to reveal the entire figure at night. Therefore, now her whole body reflects light for all to see.

On the Fourth of July, the lady, the Statue of Liberty, will be emblazoned by thousands of fireworks set off in the harbor as the United States once again celebrates its freedom, commemorating the words at her base:
“”Give me your tired, your poor, your huddled masses yearning to breathe free. The wretched refuse of you teaming shore. Send these, the homeless, tempest-tossed to me, I lift my lamp beside the golden
door!”

Yet there is another who offers safe haven and eternal freedom. Thank God for a free country and for setting us free from spiritual bondage through Christ. God’s offer of sanctuary is permanent.

“In my anguish I cried to the LORD, and he answered by setting me free.” Psalm 118:5

What does freedom mean to you?