The Lighthouse – A Place of Extremes

The Lighthouse – A Place of Extremes 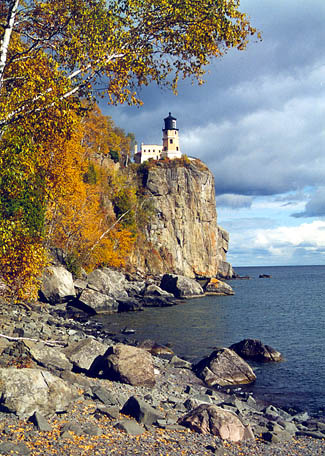 For years, mariners steered clear of Gold Island’s rocky cliffs in Lake Superior. But sudden storms could hide the dangerous shoreline resulting in shipwrecks. It wasn’t until twenty-nine vessels were destroyed or damaged and thirty-six seamen lost their lives in a 1907 storm, that Congress approved funds for the construction of a lighthouse on Split Rock, Minnesota.

There was no road built to the site before construction, so all materials had to be shipped by water and hoisted to the top of the cliff. Since work on the light station could not be done during the winter months, construction halted from November through April until the building was completed in 1910.

Living on top the cliff was subject to the whims of the lake as well. A former keeper’s daughter, Ileana Covell-Meyers recalled it this way:

“Thunderous waves pounding the caves beneath the cliffs so hard the entire rock quakes. Gale winds driving the spray completely over the promontory, sculpting ice an inch thick on the east windows. Water pipes and inkbottles alike freezing; hot-water heat failing; lightning storms knocking down curtains and making the old fashioned telephone dance in the dining room. Summer nights so idyllically quiet fish could be heard jumping far below in the dark water, or through an open window a hand-wound Victrola playing records newly arrived by boat from Chicago. Such were the early contrasts at Split Rock.”

In 1935, Keeper Covell received word that the lighthouse would be open to tourists after a road was built to make the visitation possible. In 1938, he noted that over 27,000 people had visited the lighthouse property and thought only a third of them had actually registered their attendance.

Considered one of the most beautiful lighthouses on the Great Lakes, the Split Rock Lighthouse is also one of the most visited. Who would’ve thought such beauty would come from such tragic beginnings?

Life can be full of extremes as well – ups and downs, joy and despair. But God’s love can give us victory over our trials and our lows. When we turn to Him, he lifts us out of our distress and restores us to a place of peace.

“I will be glad and rejoice in your love, for you saw my affliction and knew the anguish of my soul.” Psalm 31:7