The Lighthouse and the Bird Nest

The Lighthouse and the Bird Nest 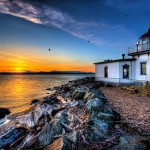 “Son, come here,” the lighthouse keeper reached out to his son and pulled him next to him by the glass panel of the lantern room.

The boy complied and looked where his father was pointing. “What is it?”

“See that little bird? It’s building a nest under the eaves.”

Fascinated, the boy watched as one bird, then another flew into the corner under the eaves with a twig in its mouth.

Day after day, the son returned to watch the progress of the nest. Soon the nest was finished, and a bird rested on it.

“It’s sitting on the eggs, keeping them warm until they hatch.”

“If we’re careful not to touch anything, it will be all right.”

When they went outside on the balcony, the bird flew away, perching atop the lantern room to watch over the nest. The keeper held his son up so he could peer into the nest.

“How many eggs do you see?”

“One, two, three! There are three eggs!”

As the father lowered the boy, he said, “Then we should have three baby birds pretty soon. Let’s go back inside so the mother bird will return.”

For the next two weeks, the boy watched the mother sit on the nest, until one day she flew away and came back with something in her mouth. As she leaned over the nest, three tiny beaks opened wide as she stuffed them with food.

“Papa! The baby birds have hatched! The mama is feeding them!”

“She’ll be busy keeping those three little ones fed until they’re big enough to feed themselves.”

Every day, the boy observed the mother as well as the father bird fly in with food for their babies. When he didn’t see the one of the parents for a while, the boy would worry.

“Where are they? Why aren’t they feeding the babies, Papa?”

“They’ll be back. It may be hard, but they’ll take care of the babies as long as necessary. They have to fly against strong winds sometimes and go quite a distance to find food, but they will be back.”

One day, the boy noticed the smaller birds perched on the edge of the nest while the parents sat atop the roof, chirping loudly at them.

“What are they doing? Why are the parents staying away from the babies?”

“They’re telling the birds to try their wings, to fly.”

“They might, but if they’re strong enough, they’ll manage. They’ve been well-taken care of.”

Soon, one by one, the young birds flew away from the nest for short flights, each time returning to the nest.

“They did it! They can fly!” The boy clapped his hands.

But the next day when the boy looked out, he saw no birds anywhere near the nest. He watched and waited, but none appeared.

“They’re gone. Where did they go, Papa?”

“But why? Why did they have to leave?”

“It’s the way of life, son. God provided parents for the young to feed them and care for them until they could take care of themselves. Once they were ready, it was time to leave the nest, to go out into the world on their own.”

“It must be sad for the parents to see them leave.”

“Sad, maybe. But they did their best to get the young birds ready.”

“What will happen to them? Will we ever see them again?”

“Maybe we will. Perhaps there will be more than one nest next year,” the father said with a twinkle in his eye.

“Train a child in the way he should go, and when he is old he will not turn from it.” Proverbs 22:6 NIV