The Lighthouse and the Clipper Ship

The Lighthouse and the Clipper Ship 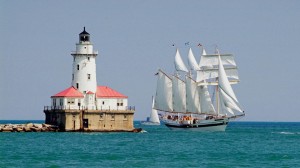 She watched for it every day. The clipper ship, with its many billowing sails was so regal, so exciting to see as it passed by. Sometimes, when it passed near sunset, the lighthouse would flash her light at the ship and say “hello,” and the ship would blow its horn in response.

The lighthouse wondered where the ship went when it left the Chicago harbor. Often she could see people on the deck, busily moving about. When the wind blew strong, the clipper ship raced by, its sales flying like wings. How exciting it would be to go so many places and see so many things, to have the freedom to move wherever it wished, not stuck in one place the way she was.

One day the lighthouse got up the nerve to talk to the ship as it sailed near.

“Your life is so exciting. I wish I could be like you.”

The clipper ship was surprised. “You do? But I admire your stately tower, your steady presence. You’re always a welcome sight as I look for the entrance to the harbor, especially when the weather isn’t clear.”

“You admire me? How strange, when all I do is stand here and flash my light or blow my fog horn.”

“But you never change, and I can always count on you to be there.”

The lighthouse considered what the ship said as it sailed away. Later that day, the winds picked up, and the lighthouse watched ships struggle to maintain control and stay on course. Nightfall approached, but there was no sign of the clipper ship coming back to the harbor. Where was it?

The lighthouse flashed its light across the waters of Lake Michigan as it did every night. Much later that evening when the wind died down, the lighthouse caught sight of the clipper ship, looking bedraggled and tired as it returned to the harbor.

“What on earth happened to you? I was worried,” the lighthouse said to the ship when it neared.

“The wind blew me off course, and I lost my bearings. I wasn’t certain where the harbor was until I saw your light. I’m very thankful you were here.”

During this time of Thanksgiving, let’s take time to be thankful for those who protect us, who stand firm in the face of danger so we can be safe. And while you’re being thankful, thank God for making you unique, and not like someone else, so you can use your unique abilities to bless others.

“I thank my God every time I remember you.” Philippians 1:3