The Lighthouse and the Foghorn

Home/Lighthouse Blog Category, Uncategorized/The Lighthouse and the Foghorn
Previous Next

The Lighthouse and the Foghorn 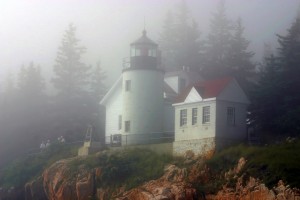 Jonas squinted through the fog. Where was the island and the lighthouse?

Since the Coast Guard had stationed him at the lighthouse, he’d taken the boat into town for supplies several times, returning with no problem. Day or night, he could always find the island.

But today was a different story. The fog had rolled in thick while he was gone, concealing everything beyond the reach of his arm. He knew the way. After all, he’d done it before. Now, though, he wasn’t so sure.

Although it was noon, the sun had disappeared behind the gray mist, hiding all evidence that it had risen that morning. Somewhere to his left was the sound of another boat. Would it see him or would they collide? He strained his ears and eyes, hearing the rumble of its engine and the water splash as it moved through. Where was it?

When a dark form appeared through the haze, Jonas saw the other boat running parallel to his. But it was going the other direction, toward the harbor, if his guess was accurate.

He continued heading in the direction he thought would take him to the island. Surely, he’d see it soon. The outline of trees became visible on his right side. Was that the island? If so, he had bypassed it and missed the boat dock. Soon, even those trees vanished into the mist, and once again, he could see nothing. Lord, where am I? Do I keep going? Am I heading out into open waters, never to be found again?

Jonas shook the thought from his mind, his training telling him to stay calm. But fear hovered over him like the fog.

He shut off the engine. In the distance, he heard the lighthouse fog horn. Jonas held his breath, daring not to make another sound as he listened for the next blast of the horn. There it was again, far to his right. He restarted the engine and turned in the direction of the horn, straining to hear. The sound grew louder, assuring him he was getting closer.

Finally, the silhouette of the lighthouse appeared ahead. And as it did, Jonas realized he had indeed been going the wrong way and was heading out to open waters. He breathed a deep sigh of relief and shook his head.

The same ornery foghorn that he often complained about and tried to tune out had led him back to safety.

Have you ever gotten lost and wondered which way to turn? Maybe God is trying to tell you something, but you’re tuning Him out. It might be a good time to stop and listen. He knows the best way.

“but whoever listens to me will live in safety and be at ease, without fear of harm.” Proverbs 1:33