The Lighthouse Army of Two

The Lighthouse Army of Two 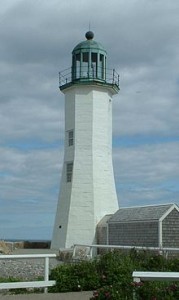 Younger sister Abigail ran to Rebecca’s side and saw the warship anchored outside their town. “They’re sending soldiers!”

Two smaller boats filled with red-coated men headed to shore. Just three months earlier, the British had plundered and burned many ships in their harbor before they were chased away by cannon fire.

“What can we do by ourselves with Mother and Father away?”

“Timothy, run! Warn everyone in town!” Rebecca sent their younger brother out the back door.

She turned to Abigail and said, “You take the drum and I’ll get my fife and we’ll try to scare them away.”

“But what will they do if they catch us?” Abigail followed her sister, holding the drum.

“They’ll surely laugh at us, but we won’t let them find us.”

The two girls hid behind a stand of trees by the shore, watching the soldiers rowing towards them. Rebecca only knew four songs on the fife, so she started playing “Yankee Doodle,” her favorite, while her sister accompanied her on the drum.

Louder and louder the girls played. Then the boats stopped, turned around and headed back to the ship. Apparently, they were afraid the town militia would greet them if they got any closer.

The odds were against the girls – they were young, they were unarmed, they were outnumbered. Yet they were brave and did what they could to protect their home.

Are you fighting a battle? Do you feel like the odds are against you? Trust God to fight the battle for you. His strength is sufficient.

“In this world you will have trouble. But take heart! I have overcome the world.” John 16:33

“Though an army besiege me,
my heart will not fear;
though war break out against me,
even then I will be confident.” Psalm 27:3-4