The Lighthouse at the End of the World

The Lighthouse at the End of the World 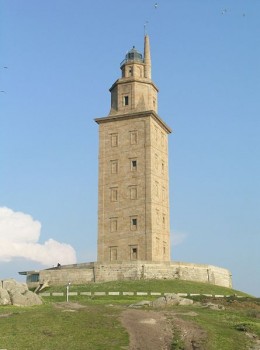 An ancient Roman lighthouse stands above the Atlantic coast in the region of Galicia, Spain, as it has for 1900 years. The structure is the Tower of Hercules and is the oldest active lighthouse in the world.

Two predominant myths claimed responsibility for the tower’s construction. One is the story that Hercules battled and killed a monster named Gerion on the site, then buried its head there and built a tower on top. The flag of the nearby city of Coruna bears the image of the lighthouse on top of a skull and crossbones.

The other myth concerns Celtic chief Lord Breogan, who ruled northwestern Spain and built the tower. From the top his son saw Ireland and desired to sail there, the result being the Celts taking over Ireland.

In reality, the Tower of Hercules was built during the reign of Roman Emperor Trajan to mark the entrance of a harbor in a region notorious for shipwrecks, earning the name Costa da Morte, or “Coast of Death”. Thought to be modeled after the Lighthouse of Alexandria, the tower bears an inscription in Latin on the cornerstone stating that Gaius Sevius Lupus, a second century architect, built the tower as an offering to the Roman god Mars.

Over the centuries, many different powers and principalities, kings and noblemen, have claimed ownership of the tower. It has seen years of neglect as well as periods of restoration. Its light has been fueled with wood, olive oil, paraffin wax, petroleum vapor and now electricity. Its 234 steps have been climbed by monks and priests, kings and warriors, lords and peasants, but today is climbed by visitors from all over world.

At some time, we’ll all reach the coast of death and the end of our time on earth. Will we approach it with fear or assurance that God will be with us?

“Do you not know? Have you not heard?
The Lord is the everlasting God,
the Creator of the ends of the earth.
He will not grow tired or weary,
and his understanding no one can fathom.” Isaiah 40:28