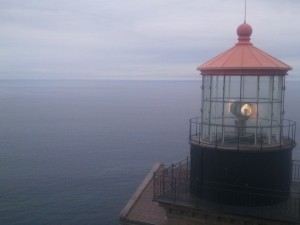 “I wish I could have a birthday party!” Eight-year-old Amanda crossed her arms and stomped her foot.

“Sweetheart, we’re going to celebrate your birthday. I’ve got a cake in the oven, and we’ll have it after lunch.”

“But I want a big party! You know, like the tea party in Through the Looking Glass.” Amanda pointed to the book with a picture of a long table featuring several guests. Ever since the book had arrived in the lighthouse library box, Amanda had been fascinated with the tea party.

“Well you have your sister and brother to celebrate with you, as well as your father and me.” Mother nodded to three-year-old Lenore and baby Henry playing on the floor nearby.

“But I want friends, lots of friends to come celebrate with me. But nobody can come here where we are, so far away from everybody.”

The family had only been at the remote Point Sur Lighthouse a short time, having moved there when Papa became lighthouse keeper. The light station was isolated from the people in the nearest town, and the dirt road up the mountain where the lighthouse perched at the edge of the Pacific Ocean was difficult to navigate. Most supplies arrived by ship and had to be hauled up the steep cliff by a lift.

Papa pushed back his chair from the table and extended his hand to Amanda. “Come with me.” 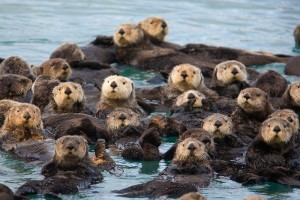 Amanda took his hand and they strolled out to the edge of the mountain. “Look down there.”

Amanda gazed down into the waters near the beach where beds of kelp turned the water dark.

“See those heads popping up through the kelp?”

Amanda squinted. “There’s one! There’s another! What are they?”

“Sea otters. They like to feed in the kelp. How many do you see?”

“One, two, three, why Papa, there’s more than twenty!”

“I bet each time they pop up they look at you and say, ‘Happy Birthday, Amanda!’” 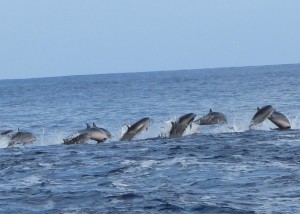 Amanda grinned, then she heard a barking noise. “What’s that sound, Papa?”

“Come see.” They walked around the bend and gazed down at a large rock covered with animals.

“Those are sea lions.”

“And they’re saying, ‘Happy Birthday, Amanda,’ too, aren’t they?”

Amanda jerked her head toward some movement in the water. “Look Papa! Dolphins! They look like they’re coming this way! They’re coming to celebrate my birthday too!”

Papa stared out at the vast ocean. “Over there. What do you see?” 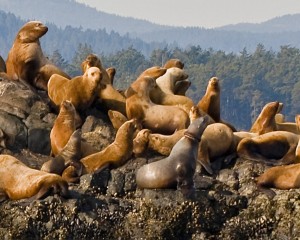 Amanda held her hand over her eyes and focused in the distance. “I see something big splashing around. What are they?”

“Whales. See how they wave their tail when they go under?”

Amanda jumped up and down. I see them! Are they waving at me?”

“What do you think?” Papa gave her a wink. “Seems to me like all God’s creatures have joined together to wish you ‘happy birthday.’” 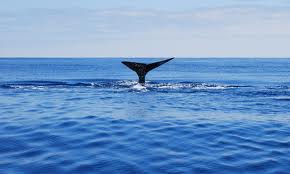 “So God created the great creatures of the sea and every living thing with which the water teems and that moves about in it, according to their kinds, and every winged bird according to its kind. And God saw that it was good.” Gen. 1:21