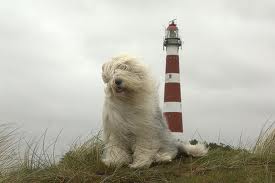 Something was wrong. On October 11, 1918, Keeper Francisco Cavalieri was at work in the tower at Punta Borinquen Lighthouse in Puerto Rico, his wife and children in the family quarters, when their dogs began to bark wildly and ran out of the house.

The keeper’s wife sensed trouble, grabbed her children and followed the dogs who were yelping madly as they ran for higher ground. When the keeper looked out and saw his family running away, he wondered what was wrong and raced down the tower to run after them.

Minutes later, an earthquake struck, shaking the lighthouse and cracking the masonry. After the quake, an unusually high wave crashed over the tower and the quarters, undermining the foundation. Thanks to the dogs’ warning, the family escaped injury.

At Portland Head Light in 1940, keeper’s wife Martha Sterling enjoyed sitting by a window in the keeper’s quarters while she knitted and looked out to sea. The family’s chow dog that normally napped by her on the  floor, suddenly sat up and began barking at her chair. The dog’s behavior was so bizarre, Martha got up and moved away from the chair. Seconds later, a rogue wave smashed into the station, slamming the side of the house and crashing the window where Martha had set. Glass flew everywhere, but thanks to the dog, Martha was not harmed.

These are only two stories of many that tell how dogs saved people at lighthouses by warning them of danger. In a remote area where there was no way to alert the inhabitants, these animals with their sensitivity to danger proved to be faithful guardians.

Some might call them guardian angels. Others instinctive. Yet, these animals were created with an ability to detect changes in the atmosphere. And neither this creation nor the circumstances in which they were used were coincidental.  So who is “man’s best friend?” Dogs? Or their Creator?