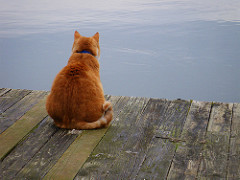 Cats have been friends of mariners for centuries.

They had an important job on ships – to keep the vessel free of rats and mice that not only ate food supplies, but gnawed through the ships’ ropes.  Cats were also common along waterfronts where they controlled rodents in warehouses and helped clean up the remains from fish processing.

Mariners had a high respect for cats, often believing them to have special powers. Although considered unlucky in some places, having a black cat on board a ship was believed to offer protection from dangerous weather. Even fishermen’s wives kept black cats at home in hopes that they would protect their husbands at sea. 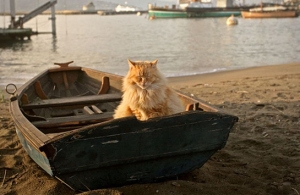 Polydactyl  cats (with more than the usual number of toes) were popular sea cats because they were thought to have more balance and be better mouse-catchers. Some people believed storms were stored in cat tails, as evidenced by the static electricity that appeared when a cat was petted, making it taboo to pet a cat. If a ship’s cat fell overboard, the ship might be hit by a terrible storm, and if the ship didn’t sink, it would be cursed with nine years of bad luck. Some other feline superstitions concerning weather included – if a cat licked its fur against the grain, a hailstorm was coming; if a cat sneezed, it meant rain; and if a cat was frisky, expect windy conditions.

Cats often survived shipwrecks and took up residence at nearby lighthouses. People living near Cape Cod believe the area’s high number of polydactyl cats is a result of ship rescues by Cape Cod lightkeepers. At lighthouses, cats were as valuable as they had been on ships, catching rodents and even eating bugs that were drawn to the light. Cats were also alleged to forecast weather at lighthouses. If a cat slept with its back to low pressure and cold, it signaled the arrival and direction of a weather front. If a storm was coming, a cat’s keen ears could hear it in advance, evidenced when the cat went into hiding in expectation of the storm. 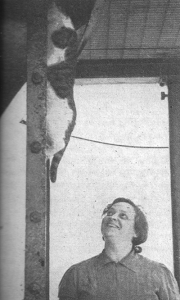 Perhaps Deer Island Light’s most famous resident was “The Climbing Cat.” The cat was well-known for its ability to climb ladders and negotiate the uneven levels of the lonely caisson lighthouse guarding the passage into Boston Harbor. More than an agile climber, the cat was also an excellent fisherman. The feline would descend to the lowest level of the light and sit there, studying the water. When she spotted a fish, she’d leap into the water, disappearing underneath a few moments before surfacing with a wiggling fish in her mouth. Then she’d swim back to the tower and climb up the ladder with her prize, ready for a private feast. 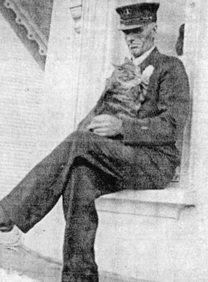 Sambo was another famous lighthouse cat. Around 1929, Sambo Tonkus (Mr. T) was born at the Nubble Lighthouse. Sambo stayed at Nubble even when the keepers changed. The ginger-striped tabby grew to be a hefty twenty pounds. After clearing the island of its rodents, he decided to go to the mainland for more. Sambo would saunter down to the water’s edge, wade in, and swim over the channel to the mainland. A few hours later, he’d return with a mouse in his jaws before swimming back to the lighthouse island with his dinner. As word spread of his exploits, tourists lined the shore waiting for Sambo to make his swim so they could take pictures of the event. 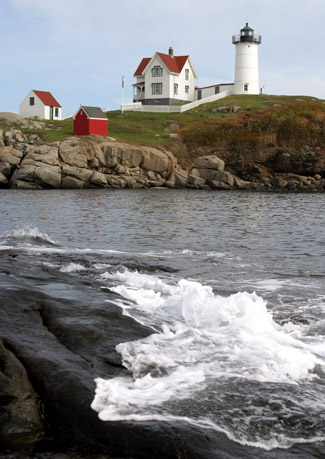 God created a vast variety of animals, each for a purpose.

Even cats have a purpose in God’s plan.

“You are worthy, our Lord and God,
to receive glory and honor and power,
for you created all things,
and by your will they were created
and have their being.” Rev. 4:11