Home » The Lighthouse Dream
Previous Next 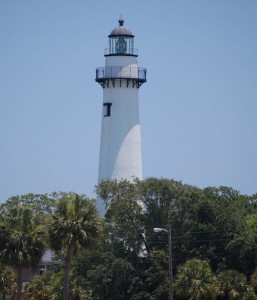 Twenty-six-year old James Gould gazed at the sketch of his lighthouse. Someday he would build it, he was sure of that. But it wouldn’t be here in Massachusetts. He would build it somewhere in the south, but where, he didn’t know.

Meanwhile, he had other jobs to finish, other buildings to build. Besides his job managing the sawmill – buying the timber and supervising production – James had been asked by his employer to build a new home for him and his wife. James rolled up the lighthouse sketch and put it aside to work on a design for the house.

Two years later, James was on a ship to Savannah, Georgia after being hired by the U.S. Government to be a timber surveyor. Live oak was considered the best wood for building ships, and James would comb southern coastal forests to procure wood for the first US Navy. He took his lighthouse plans with him, sharing them with only a few close friends. But the lighthouse would not be built yet, as James spent the next few years living in swampy areas among hostile Indians as he carried out his work.

In 1807, the US Treasury advertised for a builder to construct a lighthouse on St. Simons Island. James jumped at the chance to bid for the contract, however, he disagreed with the specifications set forth in the notice. He submitted his proposal anyway with his suggested changes and won got the contract.

James was finally going to build his lighthouse. After four long years of labor, the lighthouse was ready to be lit in 1811. When the lighthouse was finished, the government offered him the opportunity to be its first keeper, a position he held for the next 27 years.

It took many years before James saw his dream come true. During that time, he never gave up hope, but kept working toward his goal.

Sometimes, it seems that we will never see our dreams become reality – that they’re too hard to achieve with too many obstacles in the way. But we never know when the opportunity will arise for our dreams to come true. Hold onto your dream – it’s uniquely yours to fulfill.

Do you have a dream?

“May he give you the desire of your heart and make all your plans succeed.” Psalm 20:4