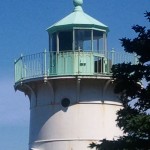 Ahhh! Another beautiful morning as the sun breaks through the clouds sending streaks of light across the water.  In all my years on this island, I never get tired of this sight. I love these early Maine mornings. They say we see the sunrise before anybody else in the country. How about that? 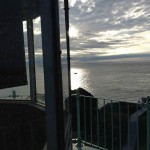 But I was already awake before the sun appeared. In fact, I was awake all night, shining my light out for miles. Just as the sky began to lighten, I watched my friends go out in their lobster boats. They get a jump on the day with so many lobster traps to check. Amazing how many these guys have. Why, I hear they have anywhere from 400 to 800 traps! Things sure have changed since I first started watching out for them, letting them know where the entrance to their harbor was. I’ve seen generations of lobstermen pass by. Well, there’s John and his grandson Davey going out now. I knew John’s father and his father before him. I get excited every time they go out and smile every time they come back, counting each one like a shepherd counts his sheep. 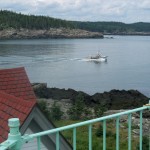 And the boats! Why, they’ve gotten mighty fancy and big. Why, I hear some of the new ones even have something called sonar to help them find their traps. I bet their ancestors would have liked to have that convenience.

Yes, I’ve seen a lot since I was first built here in 1876. People have come and gone. I used to enjoy watching the light keepers’ families grow up around me. Those little ones sure could get into some things! Then the families left and those nice young men came to take care of me – the Coast Guard, they call them. But then they left too, and nobody was here to take care of me so I could take care of all those people out there at sea. My light was out for about 25 years, and my building got rusty and dirty. The keeper’s house next door looked pretty rough too.

But then something wonderful happened! A group of people got together and called themselves my friends. They started sprucing up the old place. Everything on the island got new life. You should’ve seen those people work! Can’t remember all their names, but I still see some of them, like Kathleen and Tim. Some of Willie Corbett’s grandchildren come out to see me. He was the last keeper here. Now his grandchildren have grandchildren. Imagine that! And even one of those Coast Guard men who used to be here comes by almost every day to check on me. His name is Terry, and we go way back. Just the other day he was out here giving my lantern room a new coat of paint, making me look like I used to again. 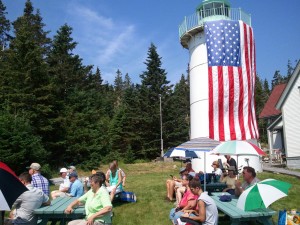 Now I have visitors every summer. They come from all over the place to stay at the keeper’s house and of course, climb up my steps. Some of them help out while they’re here by keeping things clean and mowing the grass. I love hearing them talk and enjoy the view with me. You know, they even bring church to the island once in a while. What a treat to hear people sing those old hymns again. I get all dressed up for these special occasions, with an American flag almost as big as I am. 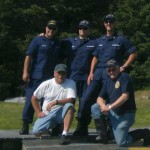 Coast Guard with Terry and Tim

Not too long ago some current Coast Guard men came out and gave me a new, stronger light. I can see so much better now, about 16 miles away. All the way across to Grand Manan Island in Canada and down to Machias Seal Island. The lighthouses over there blink at me and say hello.

Yep.This old light has a lot to be thankful for – the chance to work again, the opportunity to have visitors, and more time to enjoy the view. Thanks to my friends.

“A friend loves at all times, and a brother is born for a time of adversity>” Proverbs 17:17 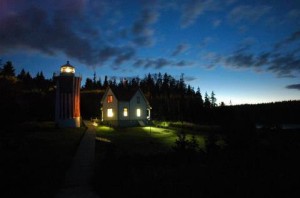 Do you like lighthouses? Maybe you can be a friend to one too. They can never have too many friends!