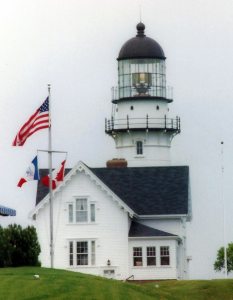 Marcus Hanna, principal keeper at Cape Elizabeth Light, couldn’t wait until morning when the assistant keeper arrived for his shift. A terrible blizzard had hit during the night, one of the “coldest and most violent storms of snow, wind and vapor … that I have ever witnessed.” All night Marcus sounded the steam fog whistle, despite being very sick and exhausted.

When the other man arrived, Marcus climbed down the stairs and stepped into the freezing cold. By then, the snow drifts were so thick, he had to crawl home to the keeper’s house, where he promptly fell asleep. Just after sunrise, his wife looked out the window and saw a schooner stuck on the rocky ledge below the fog signal house. The assistant keeper had not seen it through the whirling snow.

She awakened Marcus, who clambered out of bed, struggled through the snow to get the assistant keeper, and together they rushed to the edge of the water near the schooner. Two half-frozen sailors hung from the rigging trying to escape the assault of icy waves.

Hanna tried several times to toss a rope with a weighted end onto the ship. After failing to succeed, the assistant keeper returned to the protection of the fog house while Mrs. Hanna summoned help from the neighbors.

Despite being half-frozen himself, the dauntless Hanna waded waist-deep into the water and tossed the line again, this time hitting his target. One of the sailors managed to get the line and tie it around himself, and Hanna pulled him through the water to shore. Then Hanna threw the rope several more times before landing it on the ship again where the other crewman secured the line around his waist. Hanna’s strength was failing as he struggled to pull the man to safety.

Just in time, the assistant keeper and two neighbors arrived and helped him haul the sailor to shore where dry clothes and hot food and drink awaited. The two sailors were the only crewmembers of their ship to survive, the others swept out to sea. Amazingly, Marcus Hanna recuperated from the ordeal as well. 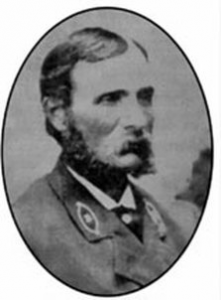 Marcus was a hero for his efforts. When asked later how he managed to prevail against the circumstances, he said, “I felt a terrible responsibility thrust upon me, and I resolved to attempt the rescue at any hazard.”

No doubt being a hero was the last thing on his mind when Marcus crawled into bed after putting in his time at the lighthouse that night. He was sick, tired, and cold, and all he wanted to do was rest. But when the crisis occurred, what he wanted to do was not important. Instead, he put the needs of others before his own.

The definition of a hero is “one who performs courageous acts.” Courage is “the quality of mind or spirit that enables a person to face difficulty, danger, pain, etc., without fear.”

Most of us aren’t called to perform the acts of courage Marcus did . But most of us face challenges at some time in our lives that require us to rise above our comfort level. We can struggle with fear and doubt, or we can trust God to be with us. In the Bible, He commands ordinary people to take courage in order to perform extraordinary accomplishments. How? By knowing He is with us and will help us. He encourages us, which means “to put courage into.”

“Be strong and courageous. Do not be afraid; do not be discouraged, for the Lord your God will be with you wherever you go.”  Joshua 1:9

Remember that next time you face a challenge.