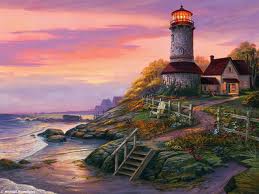 “Father, I must go. This is the life I’ve chosen.” Caleb slung his bag over his shoulder.

“Why? You’re supposed to be a light keeper, like the men in our family have always been!”

“Don’t you understand? I don’t want to be a keeper. I want to live on the sea, not beside it. I want to go places. See things!” Caleb pulled his hat down over his brow and pushed the door open.

“I know what sailors live like! You want to be free of responsibility and not have respectable work like a keeper. If that’s what you want, then go!”

Caleb stood in the door and glared at his father. Then he shook his head and left, slamming the door behind him.

Tears trickled down his mother’s face. She turned to her husband, pleading. “Samuel. You mustn’t let him leave like this.”

Samuel lifted his hand, signaling her to stop. “Lillian. It’s his choice. He’s bound and determined to live a wild life. And if that’s what he wants, good riddance!”

Lillian hoped and prayed her son would return safely, that he and Samuel would reconcile. She watched her husband on the catwalk of the lighthouse each day, surveying the water with his telescope. He never mentioned it, but she knew he was looking for Caleb.

Days passed, then weeks and months, but no word from Caleb. Was he still so angry? Would he ever return? And if he did, would Samuel forgive him and accept him back?

One day Samuel sat at the kitchen table and bowed his head. “Lord, please protect my son, wherever he is, and let him know that I still love him.”

As he raised his head, Lillian saw the tears in his eyes. “You’ve forgiven him?”

Samuel nodded. “I was wrong to try to hold him back. He’s a man and has to make his own choices. Even though he didn’t choose the life I wanted for him, I pray he’s well.”

A few days later, Samuel watched a dinghy row toward the lighthouse, coming from a ship anchored farther out. He recognized the figure before the boat reached shore and raced down the steps of the lighthouse, calling out to Lillian. “He’s here! Our son has returned!”

Lillian ran outside in time to see her husband and son embrace.

“Father, please forgive me. I’ve felt so guilty leaving the way I did. It’s been so difficult being away from you and mother so long.”

“No, son. I should be asking your forgiveness. I had no right to be angry with you for choosing a different life.”

“But you were right, Father. The life I chose has been rough, and I’ve been in situations you would not have approved.”

Samuel put his hand on Caleb’s shoulder. “That’s not important now. What matters is that you’ve returned safely.”

As our heavenly Father, God is always ready to forgive and be reconciled with his children

“So he got up and went to his father. But while he was still a long way off, his father saw him and was filled with compassion for him; he ran to his son, threw his arms around him and kissed him. The son said to him, ‘Father, I have sinned against heaven and against you. I am no longer worthy to be called your son.’ But the father said . . . ‘Let’s have a feast and celebrate.For this son of mine was dead and is alive again; he was lost and is found.’ So they began to celebrate.” Luke 15:20-22, 24