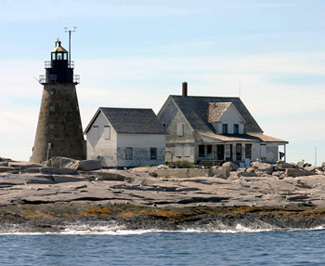 She climbed the steps to the top of the lighthouse hoping this time she’d see them.

It had been three days since her husband, the lighthouse keeper and their son had rowed away in the dory to reach the mainland 23 miles distant. Normally, they’d be gone only two days, but the unpredictable weather never guaranteed a consistent schedule. So she waited and watched, alone on the barren rock island.

She’d never expected to live in such a desolate place when they got married. She’d pictured a charming cottage surrounded by trees and flowers on a grassy knoll beside the lighthouse. But her husband had been assigned to Mount Desert Rock, a far cry from her expectations.

She picked up the spyglass and scanned the horizon, praying for a sign of their return. Shoving down her fears that something had happened to them, she continued to hope and tried to think positive thoughts.

Every time he went to town for supplies, her husband returned with a surprise gift. Sometimes it was a special spice like cinnamon that she loved to use in her baked goods. Sometimes it was a piece of fabric for a new dress. What would he bring her this time? She let her mind ramble through possibilities as the time rolled on.

If they didn’t arrive before dark, she’d have to light the oil in the lamps again as she had the past two nights. Surely, they’d arrive today. She searched the ocean once more, then seeing nothing, started to lay down the spyglass. But something told her to look again.

She did, and this time, saw a tiny speck on the horizon grow larger as it approached. There they were! Thank God, they were coming home. She ran out on the gallery surrounding the light and waved her handkerchief in greeting, then hurried down the steps and out to the shore to meet the boat.

Her son hopped out of the dory and ran to hug her, a big grin on his face. “Momma, we got you something special you’re going to love!”

“You’ll see soon enough.” Her husband said over his shoulder as he lugged some heavy sacks up the path.

After dinner, the boy asked, “Are you ready to see your gift yet?”

She’d almost forgotten about the surprise, happy just to have her family home. Wiping her hands on her apron, she said, “Yes. Where is it?”

“You have to sit down.” The boy took her hand and led her to the rocker in the living room and pointed to a large burlap sack beside the chair. “There it is!”

She pulled loose the rope drawstring, then looked inside. It was dark, but smelled of something familiar.

She reached in, plunging her hand into something loose, like dirt. She lifted out a handful and saw that it was dirt – beautiful, rich soil.

“Now you can plant flowers!”

Dirt. Something she’d always taken for granted on the mainland. But here on the rocks, it was absent. She couldn’t think of any gift she’d rather have.

Her husband reached into his pocket and pulled out a couple of packets. “And here’s some seeds to get you started.”

And so she placed the dirt in crevices of the island’s stony surface and planted the seeds. In the spring, flowers sprang to life, splashing color all over the gray rock. Each year, more dirt was brought to replace any that washed away, and more seeds were planted. Sailor’s dubbed the island, “God’s Rock Garden,” and so it was, as long as families lived there to tend it. 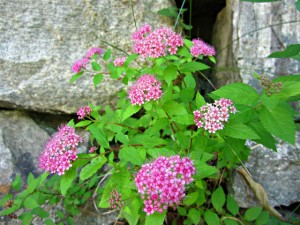 Often we take so many things for granted that we don’t appreciate them until we don’t have them anymore. Even such a simple thing as dirt was valued when there wasn’t any. What simple things do you have to be thankful for?

“Give thanks in all circumstances; for this is God’s will for you in Christ Jesus.” 1 Cor. 5:18