Home » The Lighthouse Kids Go to School
Previous Next 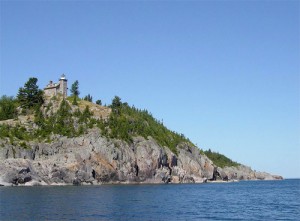 “Hurry up! You don’t want to be late the first day of school!”Mother handed Myron his lunchbox and shooed him out the door of the keeper’s house.

He ran down the hill below the lighthouse to the boat where his father waited to take him and his brother and sister to school.

Like most children of lighthouse keepers that lived on islands, the only way to get to school was by boat. Once the boat reached the mainland, the children walked the rest of the way to school.

How long it took to get to school was determined by the weather and its effect on the water.

When Willie Corbett, Myron’s father, was lighthouse keeper at Tenants Harbor Lighthouse, he had to row the children over every morning and row them back every afternoon. But this was only during the fall and spring months, since the trip was too dangerous in the winter, so the kids couldn’t attend school at that time.

Sometimes, a storm would blow up while the kids were at school, and they were forced to stay on the mainland at someone’s else’s house. Once when Dorotha Dodge’s father was the lighthouse keeper at a lighthouse in the Great Lakes, the waves were so fierce when he came to get her after school that they were breaking over the rowboat. Her father told her to just keep bailing while he battled his way back to the lighthouse where her mother anxiously awaited their return. 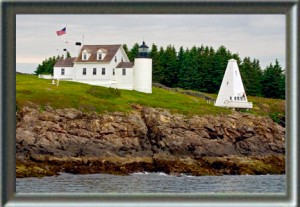 Other lighthouse children stayed with families on the mainland for the whole school year, only seeing their parents on holidays. When Roscoe Fletcher was the Keeper at Matinicus Rock, a remote island off the coast of Maine, his two daughters boarded with friends and relatives on shore during the school year and visited with their parents at vacation time. However, sometimes, bad weather prevented their visits, especially during winter vacations, and as a result, several Christmases were spent with the girls on the mainland because the weather was too bad for them to get out to the Rock.

Dick Campbell’s father was the keeper at Old Mackinac Point on Huron Island in Lake Superior. Dick, his mother and siblings, stayed on the mainland in the winter when ice blocked boat traffic in the lake. Each Christmas, the family looked forward to a reunion with their father, which was only possible if the ice allowed the assistant keeper to relieve Keeper Campbell so he could leave the lighthouse.

It can be quite a challenge getting children to school. Today, parents have to make sure shots are updated, supplies are bought, and lunchboxes and backpacks are ready. Schedules have to be posted and coordinated within the family.

But despite the hassle, parents desire to have their children educated and prepared for a successful future. So, parents, take heart! You’re doing the right thing.

“Train up a child in the way he should go: and when he is old, he will not depart from it.”

What challenges do you face getting your children to school?