Home » The Lighthouse Letters
Previous Next 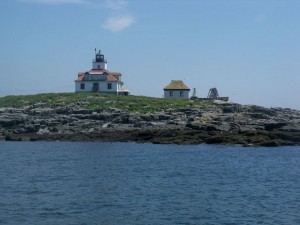 One of the biggest problems with being a lighthouse keeper was loneliness. Despite battling physical challenges and weather changes, a keeper’s most common complaint was that the job was too isolated from civilization. Throughout lighthouse history, many strong men quit the lighthouse service for this reason.

Those keepers who had families were blessed to have company, but what about the couple who had no children? For Connie Small, being the wife of a lighthouse keeper with no children was often very lonely, especially when her husband had to go ashore for errands.

Although she busied herself with housework, she still had free time which she spent doing needlework such as knitting or crocheting. But these hobbies didn’t remove the loneliness.

Reading was another activity she enjoyed, looking forward to each arrival of a new library box from the Lighthouse Service. One book she liked was “The Message,” by Mr. Edward Law, a minister, so she decided to write him a letter.

To her surprise, Mr. Law wrote her back and a lifelong friendship began with Connie and her husband. It turned out that Mr. Law had a special interest in the Coast Guard and lighthouse people after he and his sons were rescued from a boating accident in the Great Lakes. As a result, he kept in touch with his rescuers and others in the service all over the world. He was familiar with the pain of loneliness they all shared and suggested Connie write letters to them. 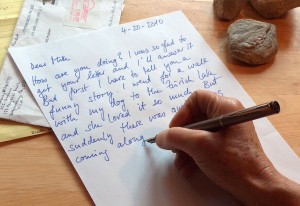 Mr. Law provided a list, and Connie began corresponding with other lighthouse people. She found that some of them were even more isolated than she. Connie began to look forward to her mail with more excitement than the magazines and newspapers that arrived with it. She and her husband eagerly sorted through the mail, discovering letters from people all over the world. Connie’s loneliness was replaced with happiness by finding new friends and sharing their lives with them. And it all started with a letter.

Today, we have the benefit of the Internet to reach people in places far from where we live. As a result, we can make friends we might otherwise not meet. Why not make a new friend today?

“A man who has friends must himself be friendly.” Proverbs 18:24 NKJV

*From The Lighthouse Keeper’s Wife by Connie Scovill Small