The Lighthouse Lookout and the Unseen Enemy

The Lighthouse Lookout and the Unseen Enemy 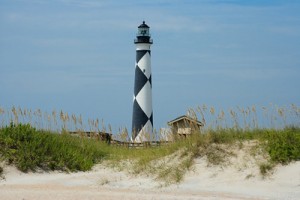 The keeper trudged up the darkened steps of Cape Lookout lighthouse, using a flashlight as his  guide.  At the top, he would join the Coast Guardsman assigned to his tower. Both men had binoculars.

Normally, the light would already be lit,  but tonight it would stay dark, and for many nights to come, as long as the danger lurked offshore.

It was mid-April 1942, and officials had implemented a blackout on the coast, requiring all lighthouses along the Eastern seaboard, as well as, all coastal cities to be kept dark. The country was at war, and although the battleground was in Europe and the Pacific, the enemy was nearby, wreaking havoc just off American shores.

From January to April, Hitler’s German U-Boats had sunk 80 ships off the coast of North Carolina’s Outer Banks. Unknowingly, the lighthouses had helped them, exposing vulnerable merchant ships to the enemy as they passed by in the dark night. The Germans referred to the exercise as the “Atlantic Turkey Shoot,” bragging about the ease with which they sank the ships, and the area became known as “Torpedo Alley.”

After an alarming loss of ships and the lives on them, which in March alone was one ship a day, the United States was forced into action. In addition to the blackout, lookouts were stationed up and down the coast to search for signs of the U-boats.  Lighthouses, towers built on the coast, and beach patrols from horseback were used to help spot the enemy boats. The water was patrolled by armed trawlers who attacked the U-boats before they could  attack the American ships. Eventually, the threat was removed, and no more U.S. ships were lost on the homefront.

The country had been caught off guard, unaware of the close presence of danger. It wasn’t until tragedy struck that the threat was realized. Fortunately, counter-measures turned the tables.

People have unseen enemies as well. There is an evil in this world that tries to hurt, kill, discourage and defeat us. Although we cannot see it, it has the ability to wreak havoc in our lives. God warned us of this enemy in 1 Peter 5:8 “Be self-controlled and alert. Your enemy the devil prowls around like a roaring lion looking for someone to devour.”

But He also gave us hope to defeat this enemy in John 16:33 “I have told you these things, so that in me you may have peace. In this world you will have trouble. But take heart! I have overcome the world.”

Are you in a battle? Take heart! Jesus will fight it for you.