The Lighthouse Nobody Wanted

The Lighthouse Nobody Wanted 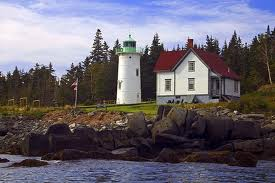 It’s not the biggest, the prettiest, the oldest or the most important lighthouse. But to some people, it’s the most valuable.

The Little River Lighthouse was first built in 1846, on an island marking the entrance to the harbor at Cutler, Maine, the northernmost harbor on the US east coast. In 1876, the lighthouse was rebuilt and was an active aid to navigation until 1975.

In 1993, the government offered the lighthouse to the town of Cutler, but they declined, unable to handle the cost for restoration and maintenance of the tower and the house.

Next the property was offered to the State of Maine, but they refused it as well.

So did the National Park Service when it was proposed to them.

So did the U.S. Fish & Wildlife Department.

The future was looking bleak for the lighthouse.

However, in 2000, the US Congress passed the National Historic Lighthouse Preservation Act, which allows nonprofits to apply for ownership of lighthouses.

In 2002, Little River Light became the first lighthouse in New England and the third lighthouse in the United States to have its ownership transferred to a nonprofit organization when it was handed over to the American Lighthouse Foundation.

Funds for the restoration were solicited from corporations, but most of the money and labor came from volunteers. The light was relit, and the lighthouse became a model for lighthouse preservation, showing what can be accomplished when someone cares.

Can you identify with the lighthouse when no one wanted it, when it was outcast, abandoned, and rejected again and again? To the majority, it was insignificant and unimportant. For a long time, the situation seemed hopeless. And yet, a new future waited, giving the lighthouse new value and purpose. In the same way, our lives can change from hopeless to meaningful if we trust God and wait for his timing.

“For I know the plans I have for you,” declares the Lord, “plans to prosper you and not to harm you, plans to give you hope and a future.” Jeremiah 29:11