The Lighthouse School of Life

The Lighthouse School of Life 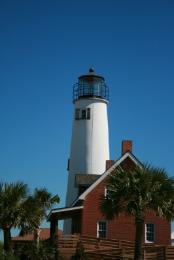 Four year old William waved to his brother and sister as the boat pulled away from shore.

“We’ll see you at Thanksgiving!” Papa stood alongside William, calling out to his wife and older children.

It was time for school to begin on the mainland in  Apalachicola, Florida, where Assistant Lighthouse Keeper Walter Robert’s family lived most of the year. But this year, the adults decided that although William was too young for school, he was old enough to stay with his father at the assistant keeper’s house on St. George Island. The family would get together again on holidays and during the summer.

At first, William had mixed emotions about being away from his mother and siblings. But soon, his father put him to work, teaching him how to help with duties at the lighthouse. He learned how to clean the lantern lens and polish the brass, work on the lights and assist with boat repairs. He also learned how to read a compass, hang the curtains that protected the light during the day and take them down in the evening.

Besides learning how to maintain the lighthouse, William learned to drive the lighthouse boat. On trips to the mainland for supplies, his father often let him handle the wheel, earning him the name “Cap’n Will” by their friends in town. Soon his father trusted William’s proficiency with the boat so much that he was allowed to steer the boat when they had to service the six beacons.

The beacon lights marked the channel and resembled miniature lighthouses on

platforms floating in the bay. Each beacon burned kerosene and had to be refueled on a regular basis. On calm days, William would steer the boat to the beacon’s ladder while his father stood on the bow with a five-gallon can of kerosene, then climbed aboard the platform and refueled the beacon while William circled. At his father’s signal, William would pick him up from one beacon and take him to the next. Not a small accomplishment for a four-year-old.

During this time working with his father, William said he learned the importance of doing a job efficiently, as well as, how to be responsible, honest and loyal. Although he wasn’t old enough to go to school, William learned valuable lessons that stayed with him the rest of his life.

“Whatever you do, work at it with all your heart, as working for the Lord, not for human masters,” Colossians 3:23

*This story is dedicated to the memory of William Roberts, author of Lighthouses and Living Along the Florida Gulf Coast, who passed away in November 2011.