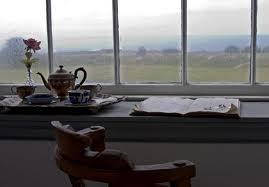 Sept. 30. 1872 – “The sails of the vessels which entered in yesterday’s storm were hanging in shreds, but no other injuries sustained.”

May 28, 1873 – “A terrible hurricane tonight at about the time of lighting up the beacon. Narrowly escaped being swept into the lake.”

The above are journal entries from Keeper Harriet Colfax of the Michigan City Light Station who served from 1861-1904. Her entries give us a glimpse of the dangers and hazards a lighthouse keeper faced.

“From the first, the work had a fascination for me. I loved the water, having always been near it, and I loved to stand in the tower and watch the great rolling waves chasing and tumbling in upon the shore.”

“My three brothers were then sailing, and how glad I felt that their eyes might watch the bright rays of our light, shining out over the waste of waters on a dark stormy night.”

Keeper Elizabeth Williams of the Beaver Island Harbor Point Light (1884-1913) shows us the pleasure she enjoyed by keeping the light, as well as, the satisfaction that helping others provided.

Lighthouse keepers were required to keep daily logs recording weather and events, but many keepers provided more details. Some listed the duties performed that day, while others identified passing ships. Visitors to the station were mentioned, as well as, personal information about illnesses.

From these accounts, we get to look through the windows of the lighthouses and into the lives of those who lived and worked there. Because they wrote down these things, we have a record of history about an era that no longer exists.

Throughout the Bible, God instructed men to write down what they had witnessed to preserve it for future generations. And because they did, we still have the information thousands of years later. Shouldn’t we do the same?

“Go now, write it on a tablet for them, inscribe it on a scroll, that for the days to come it may be an everlasting witness.” Isaiah 30:8