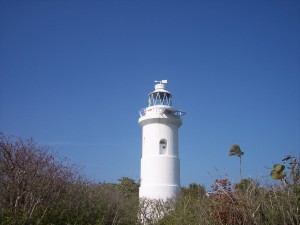 Willie Potts knew he’d landed one of the most desirable jobs in the Bahamas. Although he had worked at other lighthouses in the islands, this new lighthouse built by Britain’s Imperial Light Service was one of the easiest to work.

The shortest tower in the service at 75 feet, it had half as many steps as the one at Great Isaac. For an older keeper like Willie, this was a great advantage and far less arduous. He stood at the base of the recently inaugurated tower and gazed up at the gleaming white building, proud to be its first keeper.

Stirrup’s Cay was an isolated location, with no other inhabitants besides Willie and his wife. Calm and peaceful, the island was surrounded by turquoise water and had a natural harbor that was one of the most protected areas for ships lying anchor. It wasn’t uncommon to see British ships in the harbor, but soon he noticed other ships – either flying the stars and stripes of the United States or the Confederate flag of the southern American states.

Despite Britain’s proclaimed neutrality during the American Civil War, the country relied on the cotton the Southern states exported. So throughout the war, blockade runners carried cotton to Nassau in the Bahamas and exchanged it for goods from England. Willie watched with anxiety as Union ships hid out nearby, waiting to intercept the Confederates in route. More than once, he saw a chase take place from his perch in the lantern room, hearing guns firing as the Union Navy took pursuit.

Willie shook his head, hopeful no stray shots landed nearby. Who would have thought someone else’s war would threaten his peace, and that the safe harbor would no longer be safe? It would be two more years until the Civil War ended and peace returned to the island.

Everyone needs a place of peace and safety, a safe harbor. Where is yours?

*Story based on information from Last Lights by Annie Potts. Name of actual light keeper unknown.