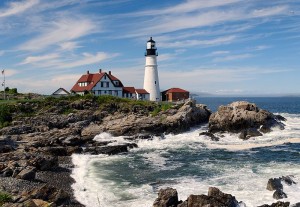 Little Donald followed the primary lighthouse keeper around like his shadow. Although Donald’s father was the assistant keeper, it was the bearded, white-haired former mariner with the pet parrot who fascinated the young boy. Donald listened with rapt attention to the veteran’s tales of the sea.

The old keeper enjoyed the boy’s company and took the opportunity to teach the lad how to tend the beacon and the fog signal, as well as, how to identify ships passing by on their way into and out of the harbor. Donald also learned how to help with other duties of a lighthouse keeper, such as painting and taking care of the machinery.

One of the most important lessons the keeper tried to teach young Donald was the danger of living near the sea. The seasoned sailor had experienced firsthand the erratic moods of the ocean and had learned to respect the power of the sea.

Donald learned this lesson the hard way, however. One morning his mother dressed him in new clothes she had made for him to wear to school. As he waited by the sea for someone to take him, he saw a toy sailboat tossing about on the waves below the lighthouse.

Anxious to retrieve the boat for himself, he climbed down the rocky ledge and waited for a wave to push the boat toward him. When the wave shoved the boat in his direction, he reached out for the toy, but his leather shoes slid on the slick rocks and he slipped into the sea. Donald didn’t know how to swim, and he thrashed about, desperately trying to stay above water.

Meanwhile, back at the lighthouse, the keeper’s parrot began to squawk frantically, using all the words his master had taught him. The keepers realized something had alarmed the bird, so they looked for the cause of his distress. When they discovered Donald was missing, they began to search for him. The lighthouse dog spotted the boy in the water, and the elderly lighthouse keeper dove in and saved the lad.

We might not have a parrot watching over us, but we have something even better. How comforting to know God watches over us.

“The Lord will watch over your coming and going both now and forevermore.” Psalm 121:8