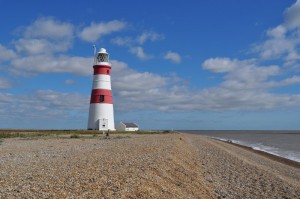 Mr.Brooks strolled along the coast of Orfordness in Suffolk, England. It was Christmas Eve on the deserted island, and he hugged his coat against the cold, winter air. What was that ahead on the beach?

It looked like a parcel lying just beyond the reach of the waves that slapped the shore. He walked over, lifted the package, and discovered it contained letters. Water had seeped inside and loosened the flaps of some of the envelopes, revealing their contents. Brooks, a member of the Coast Guard, soon realized the letters were addressed to various regions in the country, and some even contained coins meant for the recipients. He needed to get these letters delivered.

A guest had come to the island to visit the lighthouse keeper, and Mr. Brooks gave the wet packet to the man to take back to the mainland. This gentleman in turn passed the letters to an authority who re-addressed and re-posted each letter with an explanation of its delay. Such attention resulted in all the letters reaching their destination on Christmas Day, providing a joyful holiday reception for the recipients.

But where had the letters come from? As it turned out, on December 20, the crew of a lightship anchored miles off the coast had attempted to toss the packet to a passing ship for delivery to their loved ones back home. However, the throw wasn’t strong enough and the packet didn’t reach the ship, falling into the wild North Sea instead. The lonely sailors watched with bitter disappointment as they saw their Christmas greetings and gifts float away.

What joy they experienced when they later learned the letters had indeed reached their destinations anyway. No doubt all involved realized the Christmas miracle they had witnessed and shared the pleasure of its blessing.

This Christmas, may you find unexpected joy with the blessing of Christ’s birth.

“Then the angel said to them, ‘Do not be afraid, for behold, I bring you good tidings of great joy which will be to all people.’” Luke 2:10 NKJV