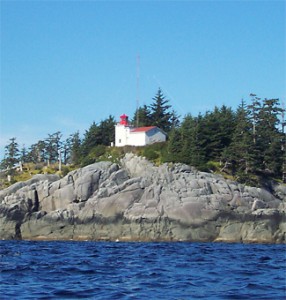 John Coldwell, keeper at McInnes Island Lighthouse, loved to fish. The waters of Millbanke Sound, British Columbia, were a great place to catch salmon. One day, he set out in the boat looking for signs of a bait ball, a mass of small herring that ripple the surface of the water. Larger fish like salmon are attracted to these balls for their source of food. Usually, sea gulls help locate them too, dipping into the water to grab a bite as well.

Noticing such activity ahead, John headed in that direction. Just then, a call came through on his radio from the other keeper.

“John, there’s a big pod of orcas heading your way.”

Although orcas don’t usually attack humans, being in the middle of a group of hungry killer whales is no place for someone in a small boat. John hurried to get over to the edge of the water and wait in a kelp bed, out of the way of the whales. But the next thing he saw was not the whales, but a group of sea lions scurrying toward him, almost “walking on the water they were moving so fast.” The sea lions came close to the shore as they tried to avoid the orcas. 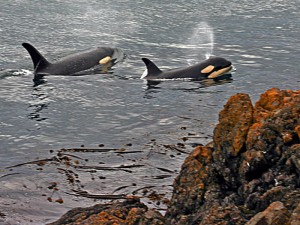 John waited anxiously for the whales to arrive, expecting them to pursue the sea lions. But when they appeared, the whales headed toward the herring ball instead. As he watched the whales attack the ball, he heard a splash beside him. He glanced around him and found the six sea lions surrounding his boat, their heads above the water as they watched the whales too. Fortunately for them all, the whales finished up the small fish and headed away into deeper water. John and his new friends breathed a sigh of relief after the close call they had with the hungry predators.

Have you ever had a close call? I have, and I know how thankful I was afterwards that danger eluded me. At times like those, I realized Someone was looking out for me, Someone much bigger and more powerful than myself.

Thank God, He does watch over me. I need Someone to take care of me. Do you?

“The Lord will keep you from all harm— he will watch over your life;” Psalm 121:7