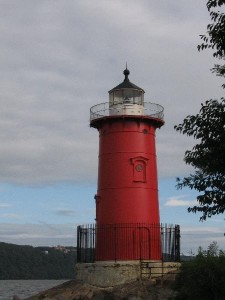 The little red lighthouse settled into its new home on Jeffrey’s Hook in the Hudson River. Built in 1880, it had been moved to the site when it was no longer needed in its former location in New Jersey.

Jeffrey’s Hook was a rocky point of land that jutted out into the river near the city of New York and had long needed its own lighthouse. The little red lighthouse wasn’t very big, at only forty feet high, but it was big enough for the location. It beamed its light out over the narrow channel between New York and New Jersey, warning traffic on the busy waterway of the dangers hidden below the water’s surface.

For years, the lighthouse did its important job protecting the vessels that passed. But one day, men and equipment arrived and began to build a bridge nearby. In 1931, the huge George Washington Bridge loomed over the little lighthouse. The lights on the bridge dwarfed the lighthouse light, so in 1947, the lighthouse was decommissioned and abandoned.

Except for a children’s book written in 1942 called The Little Red Lighthouse and The Great Gray Bridge, the lighthouse would have disappeared into history. But when in 1951, plans for its demolition were announced, thousands of the book’s fans started a national campaign to save the lighthouse. Thanks to their efforts, ownership of the lighthouse was transferred from the Port Authority of New York and New Jersey to the New York City Department of Parks and Recreation.

The Little Red Lighthouse is now Manhattan’s only remaining lighthouse and an important feature of George Washington Park at the foot of the bridge. Visitors can climb the stairs to the top of the tower where the lantern room is again fitted with a working lens that blinks proudly at cargo barges and passenger ships sailing under the George Washington Bridge.

Sometimes people can feel too small and too insignificant like the Little Red Lighthouse. But God knows where we are, He hasn’t forgotten us, and He cares.

“Are not two sparrows sold for a penny? Yet not one of them will fall to the ground outside your Father’s care. And even the very hairs of your head are all numbered. So don’t be afraid; you are worth more than many sparrows.” Matthew 10:29-31

In fact, you are worth so much that He sent his son to let you know how much. “For God so loved the world, He gave his one and only Son, that whoever believes in Him shall not die, but have eternal life.” John 3:16 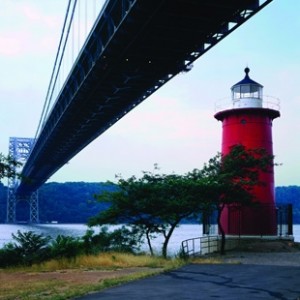